To raise funds for seafarers 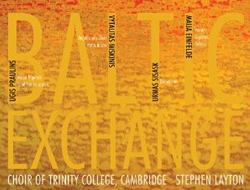 THE Baltic Exchange is selling a collection of choral music called "Music for Seafarers" with revenues going to the Mission to Seafarers, the Sailors Society and RNLI (Royal National Lifeboat Institution) Salcombe.

The highlight of the collection is the Anthem for Seafarers, a brand new composition based on the most famous of seafaring hymns "Eternal Father, strong to save". The hymn, originally written in 1860 by William Whiting, is associated with both the British and American navies as well coastguards and marines.

The Anthem for Seafarers is an updated version of this hymn composed by Malcolm Archer, former director of music at St Paul's Cathedral. First performed in 2010 in Vancouver to commemorate the International Maritime Organisation's "Year of the Seafarer", it is the centre piece of the collection.

Said Baltic Exchange CEO Jeremy Penn: "As shipbrokers and charterers, Baltic Exchange members are at the business end of the shipping industry and we all rely on the dedication of the 1.3 million men and women who sail the world's ships to keep global trade moving."

The Baltic Exchange, an independent source of maritime market information, has 600 members who represent most of the world shipping interests.

This news is a total 6705 time has been read