TOC 2007 to support from Marport 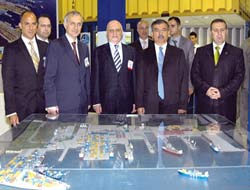 TOC, a conference and exhibition focused on maritime shipping, terminals and ports was held in Turkey for the first time with support from Marport.

TOC, a conference and exhibition focused on maritime shipping, terminals and ports was held in Turkey for the first time with support from Marport. In his speech at the conference, Arkas Board of Directors Chairman, Lucien Arkas, noted that freight from the Black Sea needed ports in Marmara.

The exhibition's opening ceremony was conducted by Minister of Transportation for Turkey, Ismet Y?lmaz, and was a forum for the discussion of the scale and opportunities for growth in global shipping trade, obstacles in capacity limitations and the future of the global transportation network, as well as Eastern Mediterranean and Black Sea shipping focused on the Turkish market. Marport’s stand at the exhibition also drew a large number of visitors.

Eighty-seven percent of trade is maritime

In his remarks, Ismet Y?lmaz emphasized the importance of shipping for the Turkish economy, saying, "Our foreign trade has grown to 222 billion dollars, an increase of 270 percent from 2000 to 2006. Exports exceeded 85 billion dollars in 2006. When we consider the fact that 87% of our foreign trade is done by way of maritime shipping, then we understand the importance of the ports which serve as the point of entry and exit for these goods.

Geographically they have to move through Turkey

Following the remarks by Minister of Transportation, Ismet Y?lmaz, Arkas Board of Directors Chairman, Lucien Arkas, noted that Turkey’s container traffic in 2007 would be 4.5 million and that this figure was far below Turkey’s potential.

Arkas pointed out that maritime shipping to the Black Sea had to increase, saying, “Black Sea countries are experiencing rapid growth. Geographically they have to go through our country. The ports of Russia, Greece and Ukraine are no longer able to meet the demand.”


More ports need to be built in the Marmara region

Lucien Arkas said, “In 1996, we built the first private port in Turkey. Now Marport is Turkey's largest container port. The capacity of the Haydarpa?a Port has been the same for 10 years. Foreign trade in Turkey has tripled in six years. More ports need to be built in the Marmara region.”

With regard to automotive exports, Lucien Arkas noted, "One million vehicles are produced in Turkey annually and transferred to ports overland. There needs to be a port for export, so we are investing in a port in Gölcük that can handle 400,000 vehicles.”

Marport leaves its mark on the conference

One of the world’s most prominent events, TOC - Maritime Shipping, Terminals and Ports Conference and Exhibition has been held in the most important port cities of Europe for 30 years.

The event is an important platform bringing together representatives in the sector and was held for the first time in Turkey.