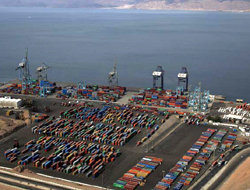 TOP management is changing at the UK?s two biggest container terminals, with the early retirement of Chris Lewis as chief executive of Hutchison Ports (UK).

Top management is changing at the UK"s two biggest container terminals, with the early retirement of Chris Lewis as chief executive of Hutchison Ports (UK).

TOP management is changing at the UK"s two biggest container terminals, with the early retirement of Chris Lewis as chief executive of Hutchison Ports (UK), based in Felixstowe, and the news that Campbell Mason will leave DP World Southampton at the end of this year.

Mr Lewis is going after three years in charge of HPUK and 23 years with the company. David Gledhill has stepped up from his position as HPUK chief operating officer to become chief executive.

Mr Mason was appointed managing director of the former Southampton Container Terminals in April 2007. His assignment concludes at the end of this year and he has decided to go back to Australia, said a spokeswoman. His job is now being advertised.

His departure came as no surprise in industry circles, with Mr Mason"s intention of returning to Australia well known.

More speculation surrounds the decision of Mr Lewis to step down, with well-placed industry sources saying that personality clashes and the division of responsibilities within Hutchison"s European port business were partly to blame.

Mr Gledhill takes over at HPUK at a time when volumes are clearly down but the major Felixstowe South deepwater container terminal development is rapidly taking shape, while other major port investments have stalled.

Anyone running a port faces a tough time right now, confronting customers that are squeezing their vendors to the limit and paying bills for stevedoring and other services later and later. One major line is now settling up at least 120 days after being invoiced, while others are routinely overdue by 90 days.

Keeping up rates and conserving cash is top priority for all terminal operators, said one port expert on Tuesday.

Mr Gledhill said he was ?looking forward to the challenges? of completing Felixstowe South ready for trade to start picking up again.

?It will be ready next year and it will be ready well in time for the recovery in volumes. It remains our objective to be first to market with new capacity.?

However, Mr Gledhill said that while Felixstowe South remained the key project to work on, another challenge was getting new business into HPUK"s London Thamesport container facility.

Thamesport lost out when Evergreen recently decided to combine one of its Far East services with China Shipping, operating this out of Felixstowe instead.

?With the consolidation of lines, Thamesport is not doing as well as it was,? said Mr Gledhill. ?There have been suggestions that we are thinking about mothballing Thamesport but that is far from the truth. This week we have confirmed an order with ZPMC for an eighth super-post-panamax crane, which will arrive next year.?

Mr Gledhill has been heavily involved in introducing new working arrangements at Felixstowe this year, including unpaid leave, reduced hours and sabbaticals, in order to avoid mass redundancies during the downturn in volumes.

?Redundancies are expensive and also it is expensive to retrain people when you need them back, and with no doubt we will need them,? he said.

?Meanwhile, we are still very busy. Productivity is better than it has been for years, partly because of changes in working practices last year and also because of process improvements over the past two to three years all coming to fruition.?

At Southampton, which suffered a crane collapse last month, no decision has been taken on whether to decommission the other two of similar design and vintage. Well-placed sources insisted that Mr Mason"s decision to leave at the end of the year was in no way connected with the accident that left a crane driver badly injured.-

This news is a total 1678 time has been read