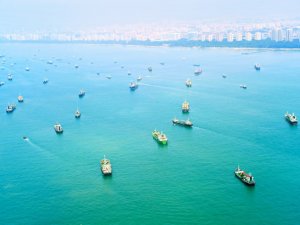 Total and Singapore-based Pavilion Energy have signed a Heads of Agreement to jointly develop a Liquefied Natural Gas (LNG) bunker fuel supply chain in the port of Singapore.

The agreement covers the shared long-term time charter of a new generation LNG bunker vessel (LNGBV) to be commissioned by Pavilion Gas by 2020. It also includes an LNG supply arrangement between the two companies enabling Total to deliver LNG bunker to its customers.

The HoA, signed on the sidelines of the World Gas Conference 2018, follows a Memorandum of Understanding (MoU) concluded by both companies in April 2017 on LNG bunkering cooperation in Singapore.

The HoA is considered a significant step forward and contributes to the development of Singapore as an LNG bunkering hub.

“The development of infrastructure is one of the key drivers for the take-off of LNG as a marine fuel,” commented Patrick Pouyanné, Chairman and CEO of Total. “For the past few months, Total has been very active in that direction. The agreement signed with Pavilion Energy marks a new step in our commitment to provide our customers with fuels that are more environmentally friendly, particularly in Singapore which is the leading bunkering hub in the world.”

The move toward LNG fuel is considered as one viable solution to complying with the International Maritime Organization’s (IMO) 0.5% sulphur content limit for marine fuels starting from 2020.

“LNG bunker not only produces zero sulphur oxides, but it also represents an available and competitive solution, which contributes to IMO’s long-term strategy on the reduction of greenhouse gas emissions from ships announced in April 2018,” Total said in press release.

Tan Sri Mohd Hassan Marican, Chairman of Pavilion Energy, said, “Pavilion Energy is pleased to work with Total on establishing a robust LNG bunker supply chain in Singapore. Our partnership sets the stage for making LNG bunker readily and reliably available for the market. Together, we mark a decisive step forward in leading the change towards cleaner and more responsible solutions with LNG bunkering in the region.”

Through its subsidiary Total Marine Fuels Global Solutions, Total is already pursuing projects to develop the LNG bunker market. In Europe, the company set its first milestone with the signature of LNG bunker supply contracts for Brittany Ferries and CMA CGM, as well as the long-term chartered bunker vessel with Mitsui O.S.K. Lines that will be positioned in Northern Europe.

Pavilion Gas says it is also committed to the development of Singapore as an LNG hub. In October 2016, the company was appointed as one of two importers to supply LNG to Singapore by the Energy Market Authority of Singapore. The company only recently received its license to supply LNG bunker fuel to vessels in the Port of Singapore in January 2016.

This news is a total 566 time has been read
Tags: Total and Pavilion Energy Agreement Seeks to Set Up LNG Bunkering in Singapore