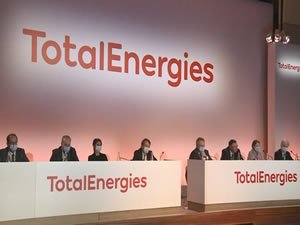 French energy group Total has completed its change of name to TotalEnergies, aiming to become one of the major players in the energy transition.

Shareholders almost unanimously approved the resolution to rebrand the company on Friday, a move which was annouced earlier in February as part of a strategic transformation into a broad energy company.

“Energy is reinventing itself, and this energy journey is ours. Our ambition is to be a world-class player in the energy transition.

That is why Total is transforming and becoming TotalEnergies.”

Total has been looking to reduce its reliance on oil products by investing in renewable energy, such as solar and wind.

The rebranding follows a week of big blows for big oil as its fellow supermajors Shell, ExxonMobil and Chevron all came under pressure to speed up their decarbonisation schemes.

This news is a total 1535 time has been read
Tags: Shell , ExxonMobil , Chevron , total , TotalEnergies