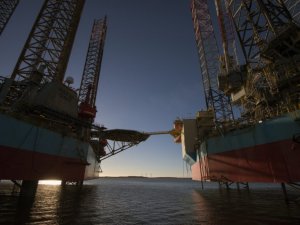 Total SA agreed to buy the oil and gas unit of A.P. Moller-Maersk A/S, the French company’s biggest acquisition since 1999 and another sign of the accelerating pace of energy deals after a long downturn.

Total will pay Maersk with $4.95 billion of its own shares and assume $2.5 billion of the Copenhagen-based company’s debt, according to a statement on Monday. The full transaction value of $7.45 billion is above what some analysts were expecting and Maersk shares jumped as much as 5.7 percent following the announcement.

Total’s Chief Executive Officer Patrick Pouyanne is following through on a hint last month that he was ready and willing to make acquisitions to grow production, taking advantage of a plunge in company valuations, the cost of drilling and other equipment during the three-year industry downturn. The Maersk assets will boost the French giant’s business in the North Sea, adding to deals earlier this year that expanded its presence in Uganda and Brazil.

“We had the feeling that on the North Sea, we had to go a step further to be more competitive,” Pouyanne said on a call with reporters. Maersk had been considering spinning off the oil and gas assets in an initial public offering, but “we offered them another option.”

The deal ranks among the largest that a super-major has done since oil prices crashed in 2014. Royal Dutch Shell Plc agreed to buy BG Group Plc for $52 billion in 2015 and has been reaping the benefits since the transaction closed the following year. In January, Exxon Mobil Corp. agreed to pay $5.6 billion in shares, plus a series of contingent cash payments totaling as much as $1 billion, for drilling rights in the Permian shale region of Texas.

Energy deals have picked up pace more broadly in recent months as the industry puts the worst of the slump behind it, although major oil companies have tended to be sellers. BP Plc has offloaded assets including a $1.7 billion stake in a Chinese petrochemical venture and Shell exited its Irish venture for $1.2 billion.

“We like this deal,” Jason Kenney, an analyst at Banco Santander SA, said in a note. The transaction is “timely and opportune” with Brent crude, the international benchmark, trading at about $52 a barrel, he said.

The combination with Maersk Oil gives Total about 1 billion barrels of oil equivalent of proven and probable reserves, about 80 percent of which are in the North Sea, according to the statement. It will add output of about 160,000 barrels a day of oil equivalent to the French group next year, rising to 200,000 a day by 2020.

Total expects to generate synergies of more than $400 million a year starting in 2020, in particular by combing the two companies’ North Sea assets. Total will update its company-wide cost-savings plan in mid-September, said Pouyanne. The deal hasn’t changed Total’s forecast for capital expenditure of $15 billion to $17 billion next year.

While the industry is becoming more optimistic, there is still cause for caution. Crude oil prices remain stuck at about $50 a barrel — half the level three years ago — and some notable traders see the outlook for 2018 weakening. Total and its European peers can cover spending from cash flow at current prices, but a fresh slump could put dividends at risk.

“We are committed to financial discipline,” said Pouyanne. “The Maersk deal offers us some good expansion opportunity while being responsible.” Total chose not to pursue shale oil in the U.S., one of the fastest growing areas this year, because assets there are expensive, he said.

Total will issue to Maersk 97.5 million shares, representing 3.75 percent of its enlarged share capital. That will make the Danish company the second-largest investor in the French giant, according to data compiled by Bloomberg.

The transaction is expected to close in the first quarter 2018. It is is subject to regulatory approval from relevant authorities including the Danish minister of energy, utilities and climate and competition authorities, plus the required consultation and notification processes with Total’s employee representatives, Maersk said in a statement.

This news is a total 490 time has been read
Tags: Total To Pay $5 Billion For Maersk Oil