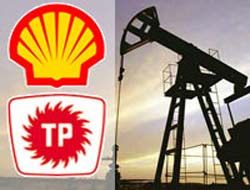 The state-run TPAO and a multinational oil company of Anglo Dutch origin have struck a deal to extract gas in northern Iraq, though the agreement still needs to be ratified by the central Iraqi government in Baghdad.

The state-run Turkish Petroleum Corporation (TPAO) and a multinational oil company of Anglo Dutch origin have struck a deal to extract gas in northern Iraq, though the agreement still needs to be ratified by the central Iraqi government in Baghdad.

Royal Dutch Shell PLC is expected to work in partnership with TPAO to build a pipeline from disputed city of Kirkuk to Ceyhan on the Mediterranean coast of Turkey, a UK daily said in its report published on Friday, emphasizing that the deal paves the way for Shell’s return to Iraq after 35 years.

“An agreement has been reached which has to be ratified by the administration in Baghdad,” a spokesman for the Turkish Energy Ministry was quoted as saying by The Times, while Shell refused to rule out an agreement with TPAO but insisted there was still no legal framework in place in Baghdad to allow any contracts to be issued to foreign companies.

“We have discussions but the contents of those discussions are really quite confidential. It is still very, very unclear what will happen in the sense that there is no petroleum law in place and the issue of security,” Ian Bromilow, Shell’s chairman for Iraq, told The Times. Late in February, Iraqi Kurds dropped their demands for autonomy in oil exploration and production, allowing the Iraqi Cabinet to approve a draft oil law, thus removed a key concern for Ankara which appeared to be prospects that the Iraqi Kurds would get a central role in oil exploration and autonomy in northern Iraq.

The draft law, which still needs to be ratified by Parliament, provides a formula for distributing revenues among all major ethnic and religious groups and allocates oil revenues between Iraq’s 18 provinces based on their population levels. The diplomatic sources earlier said Ankara welcomed the draft law, saying it was “very positive.”

Iraq has the third-largest oil reserves in the world. Most of its oil fields are in the Shiite-dominated south, but the best prospects for future drilling are in the Kurdish north. Private Turkish oil companies, including Genel Enerji of Çukurova Holding and Pet Oil, are already active in oil exploration in northern Iraq.

The Times report came a day after Turkish Chief of General Staff Gen. Ya?ar Büyükan?t on Thursday asked for government approval to launch a military operation into northern Iraq to fight members of the outlawed Kurdistan Workers’ Party (PKK) there, who he said are accelerating their terror attacks in Turkey.

This news is a total 1507 time has been read