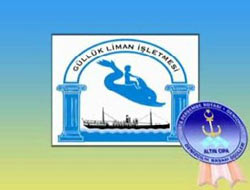 Second of (Alt?n Ç?pa) Golden Anchor Awards Ceremony which was organisated by the shipping extra of Dünya Newspaper Per?embe Rotas? and Deniz News Agency, is done at 29th june of 2007 at Sait Halim Pasha Mansion.

The ceremony which was in good care of Maritime Undersecretary of Premiership, brought all the important names of shipping establishments together. The candidates which were selected at the result of peevish studies of 15 people, took their awards, and the guests lived an amazingly nice evening with the songs of singers after the surprising fireworks show.

Enterprise supplied the opening of Güllük Port to tourism, increased the loading material which were handled and decreased the time of waiting with anchor position. Jury thought these tries and labours should be taken instance and decided to award Güllük Port with Golden Anchor.

This news is a total 634 time has been read