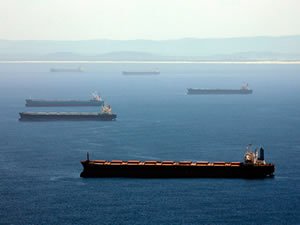 Worsening relations between Beijing and Canberra have stranded 74 vessels, about 8.1 million tons of coal, and an estimated 1,480 mariners off Chinese ports, according to an analysis of shipping data by Bloomberg. The original charterer of two of the vessels wants them to sail somewhere else to relieve the exhausted seafarers, but so far the traders who own the cargo won’t agree.

“It’s the end receiver who has not given the green light” for the Jag Anand vessel to sail to another country where it could change crews, said Jan Dieleman, the president of Cargill Inc.’s ocean transportation business. The Minneapolis-based company is the original charterer of that ship and the Navios Coral vessel, which have both been moored off the port of Jingtang since June, waiting to discharge their loads of Australian coal.

The Jag Anand’s crew told port authorities it was ready to unload when it arrived and the holder of the bill of lading has said the ship must discharge its cargo before departing, according to Dieleman. He declined to identify the end receiver of the cargo, but said that if the ship attempted to depart for another country to swap crews without their approval, the vessel could be arrested and seafarers imprisoned.

Tangshan Baichi Trading Co. is the receiver of the coal on the two vessels, although the firm could have subsequently resold the cargoes to other end users, according to a person familiar with the matter who asked not to be identified because the information is private. The company is the region’s biggest coal importer and owns three coal washers, a coking plant and has an investment unit focused on domestic coal and coke futures, according to its website.

Some of the stranded mariners are growing desperate. China has halted most crew changes to stop the spread of Covid-19, and some of seafarers have worked nearly 20 months without a break, according to the National Union of Seafarers of India.

On the Anastasia, another stranded vessel, four crew members are on suicide watch, according to a report in the Sydney Morning Herald. The crew of the Jag Anand appealed for help in a photo distributed by the National Union of Seafarers of India, holding up hand-written signs with messages like “negotiate with charterer” and “our lives are important than your cargo.”

Relations between Australia and China have steadily deteriorated this year, with Beijing putting tariffs on imports of barley and wine and also informally restricting imports of coal. The state-run newspaper Global Times has reported that the government economic planner had appeared to formalize that ban, allowing power plants to import coal without restriction unless it was from Australia.

Diverting ships to relieve mariners often comes down to costs, according to Carl Schou, chief executive officer of Wilhelmsen Ship Management, which is in charge of operations for three ships that are waiting off Chinese ports. In some cases, ship owners are resistant to divert ships to change exhausted crews.

“Diverting a ship from China to wherever does cost a lot of money and somebody has to pay for that,” he said. “There is a discussion who should pay for that — the owner, the charterer — should it be a split cost? Not many owners are willing to take such a cost right now.”

When asked last month about a ship stranded off of Jingtang, China’s foreign ministry blamed a freight forwarder for refusing to let the vessel depart.

Several vessels stranded for months recently discharged their shipments of Australian coal, according to data intelligence firm Kpler, although its unclear if the deliveries have cleared customs odr if the shipments are being held in bonded storage.

Other cargo owners appear to have sold their coal shipments outside China. The Aquaknight and GH Harmony vessels, which waited outside Bao’an Shenzhen and Caofeidian ports since August and October without discharging their shipments, recently signaled they were headed to Vietnam and Japan, according to Kpler.

But shipments of Australian coal continue to move to China. Earlier this month, the Jin Lang vessel departed from the Hay Point terminal in Queensland into the open seas. Its current destination? The port of Zhanjiang in China.

This news is a total 4544 time has been read
Tags: GH Harmony vessels , Traders at Odds With China Import Ban Keep Coal Cargoes in Limbo