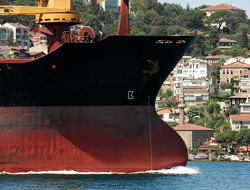 Traders hired record numbers of the biggest oceangoing oil-products tankers to store jet fuel and gasoil in Europe as demand drops and shore tanks fill up, said D/S Torm A/S, the largest refined-fuels shipper. As many as 20 so-called Long Range 2, or LR2, carriers -- each with a capacity of more than 100,000 deadweight tons -- and 15 smaller Long Range 1 vessels are stationed in Europe for the purpose, said Anders Engholm, Copenhagen-based executive vice president for tankers at Torm.

The demand is keeping carriers ?away from the market,? reducing vessel supply at a time when worldwide fuel demand has slumped, Engholm said. Traders are ?actively looking? for smaller LR1 tankers to store cargoes, he said.

The Baltic Exchange"s Clean Tanker Index, an overall gauge of the cost to ship refined crude oil, plunged 30 percent last month, lowering the expense of hiring vessels for storage. At the same time, shore tanks either are full or have no unreserved available space, meaning some traders may not be able to unload, Peter Kulsen, a Rotterdam-based refined oils consultant at PJK Services BV, said by phone March 31.

Some traders are also seeking to take advantage of a market situation called contango where futures prices rise as the year progresses, Engholm said. Contango means the price of futures is higher than the price of more-immediate supplies, compensating traders for storing.

The number of LR2s in storage use is the largest since the ships began trading about a decade ago, he said. They constitute 13 percent of the 158 such carriers presently in service, according to data from Oslo-based shipbroker Fearnleys AS. The 15 LR1s employed for storage equal 5.6 percent of the 268 tankers in service.

Together, the 35 vessels have on board about 2.5 million metric tons of so-called middle distillates, Engholm said. The strategy mirrors a situation in crude-oil tanker markets where traders hired the most supertankers in at least two decades for storage use.

A carrier called the Morning Express has been storing jet fuel off the U.K."s southern coast since Jan. 27, according to a statement from the local harbor master and ship-tracking data compiled by Bloomberg. The carriers Donax, Torinia, Alkman and Torm Helene also are there.

This news is a total 1844 time has been read