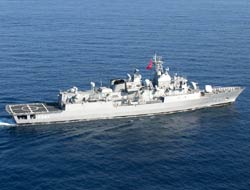 For the first time, a part of Russia's northern fleet conducted training exercises with their Turkish colleagues in the Mediterranean Sea.

The naval pilots and ground crew were put through rigorous tests where mistakes are simply not an option.

"Every time we double check everything, because if anything happens at sea there's no chance of making an emergency landing like on the ground," said Major Sergey Nagaichenko, a technician taking part in the drill, told the Russian news agency.

"Only after everything has been cleared, are pilots given the green light to fly the 11-ton helicopters... They work hand in hand with their Turkish counterparts conducting simulated search and rescue operations at sea," the agency said.

In another exercise, in which a Turkish vessel is out of fuel and water, the task of Russian warship Admiral Levchenko is to respond and assist its stricken colleague, it added.

"The Turkish navy is very strong and has deep traditions. We"ve sharpened our inter-operational ability with them. And now we are ready to tackle almost any task together," Russia Today quoted ship commander Sergey Okhrenchuk as saying.

After the maneuvers the Turkish ships headed home and the group from Russia's northern fleet continued its voyage, carrying out its duties in the waters of the Mediterranean, the agency said.

This news is a total 6926 time has been read