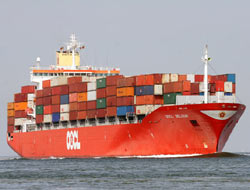 With factory holidays in Japan and China behind them, and with summer and back-to-school retail shipments building, container shipping lines are reporting nearly full vessels from Asia to all US coasts.

With factory holidays in Japan and China behind them, and with summer and back-to-school retail shipments building, container shipping lines are reporting nearly full vessels from Asia to all US coasts.

Network capacity constraints have already produced equipment shortages and have resulted in some Asia cargo being bumped to later sailings.

Near 20 percent cargo growth in the Asia-Europe trade, and similar strong intra-Asia demand have further tightened space and equipment availability.

Member lines in the Transpacific Stabilization Agreement (TSA) said vessel utilisation averaged 86 percent to the Pacific Northwest, 95 percent to California ports and 91 percent through the Panama Canal during May.

Forward bookings showed increases to the 90-95 percent range in the Northwest, and 95 percent or more for California and East Coast all-water services heading into June, with those levels expected to increase further through the summer.

Given the stronger than expected peak season and concerns over growing network constraints and productivity slowdowns through a long July 4 weekend; over inland rail congestion; and over the Panama Canal operating at capacity, TSA lines have adopted a US$200 per 40-foot container increase in their peak season surcharges, from August 1 through October 31.

"Cargo growth is moderating relative to last year, but it's on track with earlier forecasts of 10-11 percent in an end-to-end system that's seriously strained.

"Anyone waiting for ships lined up at anchor in Southern California as an indicator of congestion misses the point; even small disruptions can produce big problems with marine terminals operating at full capacity, harbor trucking delays, backed up rail ramps, empty containers stranded inland and missed delivery schedules - all things that contribute to the higher costs which the peak season surcharge is intended to address."

Conrad also noted that transpacific ships are carrying more "out of scope" cargo from adjacent trades, such as the Indian Subcontinent or Australia, or Asia-Latin America traffic, making space tighter. Demand in those and other markets are additionally putting pressure on equipment.

"Carriers are allocating and managing their vessel and equipment assets as efficiently as possible, across multiple trades, to meet increasing customer service requirements," he said.

"This makes planning and resources to cover peak contingencies all the more important."