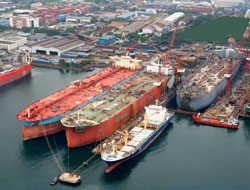 The contract award is part of Transpetro"s programme to modernise and expand its tanker fleet, which is being undertaken in two phases.

Eisa gained the contract after Rio Naval pulled out because it could not find a yard to build the tankers.

Eisa will build the oil product carriers at the Ilha do Governador yard in Rio de Jan­eiro over the next three years. Each tanker will have a capacity of 550,000 barrels.

Transpetro plans to build 26 tankers in a $2.6bn investment campaign in response to growing demand for transporting crude and oil products in Brazil and export hydrocarbons to new markets.

This campaign will help Brazil modernise its shipbuilding industry, which has suffered from a lack of investment since the 1970s.

The first phase of ship construction involves eight tankers, four of which will be built at the Estaleiro Maua yard in Niteroi and four at Eisa"s Rio yard.

Tendering is under way for the second phase of tanker building, which will involve up to 23 vessels, including the first suezmax tankers to be built in Brazil.

In November, Transpetro had to change where it wanted five aframax tankers to be built after a consortium including South Korea"s Hyundai pulled out of the running. Estaleiro Atlantico Sul is in the lead to gain a $517m contract for the five vessels.

Last week, Brazilian state firm Petrobras signed a contract with a consortium including Construtora Queiroz Galvao, UTC Engenharia and IESA to install the topsides on the $1.7bn P-55 production semi-submersible.

The hull is under construction at Atlantico Sul. The consortium has a $857m contract to install and integrate the topsides at the Rio Grande Shipyard. The platform is scheduled to start production on the Roncador field in 2011.

Petrobras said it has raised $900m in funding from banks and foreign export credits to help finance its oilfield investment programmes.

This news is a total 716 time has been read