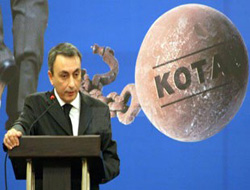 Turkish overland transportation is not the only sector affected negatively by the customs quotas implemented by European Union countries.

Turkish overland transportation is not the only sector affected negatively by the customs quotas implemented by European Union countries. These quotas also hit Turkey's external trade and industry sectors hard, according to the International Transporters Association (UND).

?The quota implementation is contradictory with the Customs Union agreement, which was compiled as of Jan. 1, 1996,? said Çetin Nuho?lu, chairman of the Turkish Society for Quality (KalDer) who spoke at a conference titled ?The Solution Strategies For The European Union (EU) Transport Quotas.? The panel was held within the framework of UND's 34th general board meeting in Istanbul Friday.

?Turkish transporters have been subjected to unfair transport permit quotas imposed by EU countries. Due to the implemented quotas many foreign investors began to shift the direction of their investments toward other countries and that has been causing serious damage in Turkey's export sector and ultimately harming Turkish economy,? said Nuho?lu.

During the conference, UND launched the ?2008 Action Plan For Quota-Free European Union? campaign against the quota implementation to the transporters, which carries Turkish export goods in Europe. The campaign aims to encourage Turkish sector members to file lawsuits with the European Court of Justice and create a specific public consciousness concerning the issue within the context of a certain strategy.

?The campaign is one of the largest communication project in Turkey's history. Entire society should participate in this project, because this is not just an issue of transporters. It is also a national matter and it also interests manufacturers, industrialists, merchants, foreign investors,? said Zeynep Gö?ü?, a journalist.

Within the framework of the campaign, press meetings will held various points of Turkey and Europe, such as London, Düsseldorf, Brussels and Strasbourg to express the legitimacy of Turkey concerning the quota issue, Gö?ü? announced.

?After joining the EU, even Bulgaria began implementing quotas without any legal arguments. This indicates that the EU, whose budget was 100 billion euros while it had 15 members and now 128 billion euros with 27 members, provides indirect financial opportunities for the new members instead of giving them monetary support,? said Faruk ?en, head of the center for Turkish studies at the University of Duisburg-Essen. Some 70 percent of Turkey's total exports are to EU countries.

Meanwhile, The International Road Transport Union (IRU) will be the partner of UND in constructing the new Roll On-Roll Off (Ro-Ro) shipyard of Turkey, Çetin Nuho?lu announced during the conference.

This news is a total 2153 time has been read