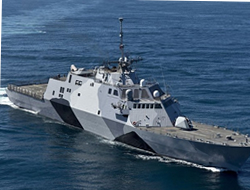 The U.S. Navys Littoral Combat Ship lacks the robust communications systems needed to transmit critical data to support facilities ashore, according to an unreleased congressional audit, the latest in a succession of troubles for the $34 billion shipbuil

The lightly manned vessel relies on ship-to-shore communications to help crews monitor the ship’s condition, perform repairs and order medical supplies, the U.S. Government Accountability Office said in its latest review of the LCS. The audit found that the communications systems lack the necessary reliability, speed and bandwidth.

The communications deficiencies add to criticism of the vessel, which is intended to be small, speedy, and adaptable for patrolling shallow waters close to shore in areas such as the Persian Gulf and South China Sea.

The program to build a total of 52 ships in two versions made by Lockheed Martin Corp. and Austal Ltd. has faced an expanding list of questions about their manning, mission, firepower, defenses and survivability even as projected construction costs have soared and the Pentagon faces automatic budget cuts of about $500 billion over a decade.

“Until communications systems and bandwidth concerns are fully addressed,” the fleet’s ability “to share information with shore support facilities may be limited and could reduce the ship’s operational availability,” according to the report, dated Sept. 9 and labeled “For Official Use Only,” that was obtained by Bloomberg News.The GAO audit was based on an assessment of issues raised in four internal Navy reports last year.

Lieutenant Caroline Hutcheson, a Navy spokeswoman, said “a lot of effort is made in evaluating how to improve the Littoral Combat Ship,” and the GAO’s recommendations “have been part of detailed discussions as the Navy assesses the program.”

The Navy’s LCS Council, formed last year to review the program, “is addressing the ships’ communications systems,” Hutcheson said in an e-mail.

While the vessels have overcome early flaws, such as cracks and corrosion, according to the GAO, they face continued questions including their ability to survive a hit from antiship missiles.

Even in its surface warfare role, when all its weapons systems are working as intended, the vessel “is only capable of neutralizing” small fast-attack boats, like those Iran has, and it “remains vulnerable to ships” with antiship cruise missiles that can travel more than five miles (8 kilometers), according to a March 2012 Navy report.

Navy officials also have questioned the practicality of the ships’ need to return to port to swap out modules tailored for duties such as surface warfare, countermine operations and antisubmarine missions.

An improvement plan issued by the LCS Council “included action items intended to address almost all” of 170 recommendations in the four Navy reports, the GAO said. The reports identified issues “such as insufficient manning of ships leading to crew fatigue,” according to the auditing agency.

Senators debating the annual defense authorization bill may weigh the new 52-page report in considering whether to restrict funding for the next 28 vessels that the Navy may request in fiscal 2015. A previous report by the GAO, the investigative arm of Congress, found the Navy was buying vessels faster than it could test their design and performance.

Senator John McCain “is working to reach an agreement with other members on an amendment that would subject the LCS program to more scrutiny and performance-based benchmarks,” Brian Rogers, a spokesman for the Arizona Republican, said in an e- mailed statement.

Canceling the remaining 28 vessels would save as much as $18 billion from 2016 to 2023, the Congressional Budget Office said last week in a menu of possible ways to meet deficit- reduction goals.

Although the vessels will operate with crews of 40 to 50 — one-fourth to one-fifth smaller than other warships — their sailors must carry out the same administrative, operational and support functions. That means the ships must transmit to their home base in San Diego a myriad of data constantly to assess their readiness, identify requirements for preventive maintenance and perform other functions from deployments around the world.

Navy officials acknowledged the importance of reliable ship-to-shore communications in their response to the GAO, saying effective monitoring of the vessel’s maintenance data “prevented a catastrophic system failure” that “allowed the Navy to take mitigating actions and avoid significant costs.”

The Navy is buying a steel-hulled version of the LCS made in Marinette, Wisconsin, by Bethesda, Maryland-based Lockheed, as well as an aluminum trimaran version being built in Mobile, Alabama, by Henderson, Australia-based Austal.

The first LCS to be deployed, the Lockheed-built USS Freedom, is scheduled to return late next month from a deployment to Singapore intended to assess the vessel’s manning and maintenance concepts and its bandwidth sufficiency. It’s currently under way to the Philippines to help in disaster relief after Typhoon Haiyan.

The nine-month deployment has been marred by breakdowns, including trouble with a cable in its waterjet steering system that’s been corrected.

This news is a total 1472 time has been read