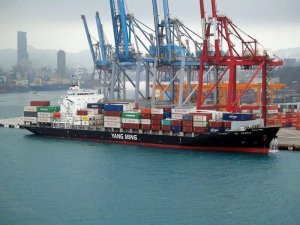 Taiwan’s troubled Yang Ming Marine Transport Corp is halting its container service to Iran, becoming the first foreign shipping line to abandon the route a year after international sanctions on Tehran were lifted, according to a company source.

Yang Ming, the world’s ninth largest container shipping line, is a comparatively small player in Iran, calling there just once a week. Several larger shipping lines have begun serving Iran since sanctions were lifted a year ago.

An executive with Keelung-headquartered Yang Ming said the firm had “ceased direct services to Iran on concerns of rising tensions there.”

“We took into consideration the recent sanctions against Iran as well as the current geopolitical tensions in the region and what’s been going on between Iran, the U.S. and Europe,” the executive said, declining to elaborate further.

Reuters was unable to confirm independently whether the cancellation of the route was due to new concern over Iran, or to changes at the Taiwanese company which is trying to slash costs after it posted a loss of $62 million in the last quarter of 2016.

The executive said Yang Ming had also adjusted some of its routes in Asia as a result of the downturn, but that ceasing direct service to Iran was mainly because of geopolitical issues rather than the cost cutting drive.

The cancellation of the Iran route is likely to be seen in the shipping industry as a further sign that business has not picked up as quickly as Tehran had hoped since sanctions were lifted.

U.S. President Donald Trump’s administration has launched a review of Iran policy and suggested it could seek tougher measures.

A U.S.-based pressure group that lobbies companies to stop trading with Iran, United Against Nuclear Iran, said Yang Ming’s decision to withdraw was motivated by the risk of doing business there. It released what it said was a letter from Yang Ming’s chairman Bronson Hsieh who described the decision to halt the Iran route as part of a “strategic realignment process.”

“Yang Ming is aware of political and legal trends in the relationship of the United States with Iran,” Hsieh wrote in the letter released by the pressure group. The company source who spoke to Reuters was unable to comment on the letter.

Container shipping firms including the world’s top three, Maersk Line of Denmark, MSC of Switzerland and CMA CGM of France, are among foreign lines that have resumed services to Iran after the nuclear deal.

Maersk said there were no changes to its Iran activities and it was business as usual. CMA CGM declined to comment while MSC could not be reached for comment.