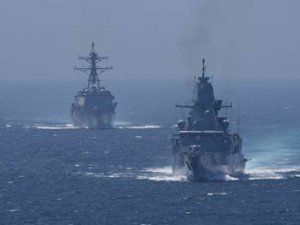 "I'm proud of the professional seamanship our Sailors showcased as we transited through one of the busiest sea lanes in the world," said Truman's Commanding Officer, Capt. Nicholas Dienna. "It was a beautiful spring day, and these men and women executed their responsibilities flawlessly."

Along with Truman, the guided-missile cruiser USS Normandy (CG 60) and the guided-missile destroyer USS Forrest Sherman (DDG 98) made the journey from the Atlantic Ocean to the Mediterranean Sea through the second busiest waterway in the world. But this event carried with it more than breathtaking visuals of the Gibraltar landscape. More importantly, it served as a strategic step for the Harry S. Truman Carrier Strike Group (HSTCSG).

"Entering the Western Mediterranean enhances our ability to support national and regional missions in the Sixth Fleet area of responsibility," added Dienna. "This includes working with our NATO Allies as well as European and African partners to maintain the right presence when and where it's needed."

Just prior to entering the Strait of Gibraltar, HSTCSG completed Lightning Handshake 2018 with its long-time African partner Morocco. During the week-long exercise, U.S. and Morocco reinforced its ability to operate together in a wide-spectrum of missions, including maritime security operations.

"As the HSTCSG continues on its regularly-scheduled deployment, successful completion of events like Lightning Handshake 2018 and transiting the Strait of Gibraltar demonstrate Truman's capability to strengthen partnerships and flexibility, to rapidly respond anywhere our team is needed around the globe," added Dienna.

This news is a total 1019 time has been read
Tags: Truman Enters Mediterranean Sea