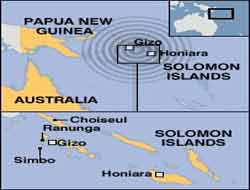 Huge waves churned by a massive earthquake crashed ashore in the Solomon Islands Monday, wiping away entire villages and triggering a tsunami alert from Australia to Hawaii.

Huge waves churned by a massive earthquake crashed ashore in the Solomon Islands Monday, wiping away entire villages and triggering a tsunami alert from Australia to Hawaii.

Julian Makaa of the Solomons National Disaster Management Office said numerous villages in the South Pacific nation's remote west were reporting people swept away as waves plowed through their communities.

Reports remained sketchy because communications were in many cases scratchy two-way radios, and emergency workers were struggling to reach outlying areas, from where they were expected to report today.

Alfred Maesulia, the information director in Prime Minister Manasseh Sogavare's office, said late Monday that 13 people were known to have been killed in the relatively well-developed township of Gizo, and an unknown number remained missing.

"Some people were seen floating on the sea during the big waves but it was very difficult to go near them," said Maesulia.

The Pacific region went on high alert for several hours after the magnitude- 8 quake struck between the islands of Bougainville and New Georgia, with Sydney's Bondi among beaches closed more than 2,000 kilometers away.

But the region-wide warnings were downgraded for areas outside the Solomons as the danger period passed.

The bone-rattling quake struck shortly at 7.39am just 10 kilometers beneath the sea floor about 350 kilometers northwest of the Solomons capital, Honiara, which was last in world headlines in April 2006 as riots swept the city. Many Chinese businesses were hit.

"It was just a noise like an underground explosion," said Dorothy Parkinson, a Gizo resident. "The wave came almost instantaneously. Everything that was standing is flattened."

Within five minutes of the quake, waves of between three and five meters roared ashore and went up to a kilometer inland, inundating buildings and sending thousands fleeing for higher ground, witnesses said.

"There wasn't any warning - the warning was the earth tremors," Alex Lokopio, premier of Western Province, told Radio New Zealand.

"It shook us very, very strongly and we were frightened, and all of a sudden the sea was rising up."

Along the coast "all of the property was washed away to the open sea," he said.

Soon after the temblor, the Hawaii- based Pacific Tsunami Warning Center issued bulletins for the Solomon Islands and neighboring Papua New Guinea, and lower-level alerts for most other South Pacific countries, eastern Australia and Hawaii.

The center's warnings outside the Solomons' zone were lifted within hours, but Australian officials closed beaches along the country's east coast, stopped ferry services in Sydney and warned fishing boats to return to port in precautionary measures that were lifted by the end of the day.

In Gizo, the capital of Solomons' Western Province, resident Judith Kennedy said water "right up to your head" swept through the town. Her father, dive shop owner Danny Kennedy, said the surge carried detritus with it.

"There are boats in the middle of the road, buildings have completely collapsed and fallen down," he said by mobile phone.

Lokopio said most government offices in downtown Gizo had been badly damaged, along with police stations and at least one hospital.

Up to 4,000 people who fled to a hill behind the town may be in need of emergency shelter and other supplies, he said. Strong aftershocks continued throughout the day, adding to fears.

A national state of emergency went into effect, although damage appeared to be localized in the country's west, with a sea surge of just 15 centimeters recorded in Honiara.

The Solomon Islands is a poverty- wracked archipelago of more than 200 islands northeast of Australia, with a population of about 552,000.

This news is a total 8052 time has been read