Tug and Barge Run Aground in New Jersey 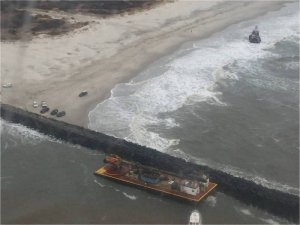 The U.S. Coast Guard was investigating the grounding of a tug and barge in the Atlantic Ocean near the Absecon Inlet in southeastern New Jersey on Saturday.

According to the Coast Guard, personnel from Coast Guard Station Atlantic City arrived on scene, but due to weather conditions, salvage operations for the tug and barge had to suspended until Sunday.

The Coast Guard reports that the 77-foot tug Miss Katie experienced a loss of power and ran aground north of the Absecon Inlet, and the 135-foot barge drifted and ran aground on the south side on the inlet.

No injuries or pollution have been reported.

This news is a total 1423 time has been read
Tags: Tug and Barge Run Aground in New Jersey, Turkish, Maritime