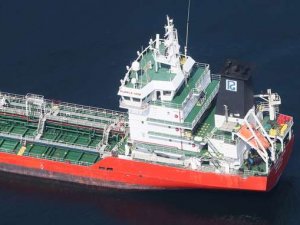 The tanker laid anchor due to engine problems, but the hit was hit by the convoy of pusher tug and coal barge. Following the collision there were no underwater breaches and water ingress, as all the vessels remained afloat. The barge suffered bow damage, while the chemical tanker Purple Gem was damaged at the port stern board. The accident was reported to local authorities, but no rescue operation was required, because both vessel remained afloat and remained manageable. During the accident there were no reports about injuries.

The Swedish Coast Guard assisted its Danish colleagues by flying over the scene and photographing, especially to determine if oil leaked from any of the damaged vessels.

“We still had a plane up to watchflight so we helped the Danes”, said Tomas Mollden, chief officer at the Swedish Coast Guard’s management center. “But the crew aboard the plane saw no oil in the water”, added he.

The local authorities initiated investigation for the root cause of the accident. The police requested information from the both parties about the collision and will inspect the both ships.

This news is a total 1070 time has been read
Tags: Tug VT Electron collided with chemical tanker Purple Gem in Baltic Sea