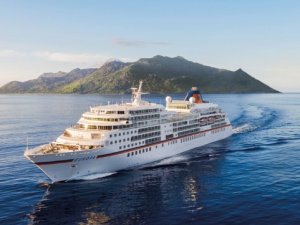 The German TUI Group announced that it completed the sale of its subsidiary Hapag-Lloyd Cruises to TUI Cruises, an joint venture company that TUI operates with the Royal Caribbean Group.

The transaction was announced in February 2020, prior to the coronavirus sidelining the cruise industry. At the time, the transaction, which valued the company at 1.2 billion euros, was reported to be part of TUI Group’s strategy to deliver additional profitable growth at a lower level of capital intensity. The integration of Hapag-Lloyd Cruises into the joint venture was reportedly designed to allow TUI to participate in the global cruise industry’s growth at a low level of capital expenditure. One of the most historic names in cruising, Hapag traces its roots to the 1800s and the immigrant trade. In 1891, the company operated its first luxury cruises, but after World War II the cargo operations were rebuilt before returning to passenger operations in the 1970s. TUI AG entered the tourism market in 1997 with the acquisition of Hapag-Lloyd, which at the time was separated from the cargo shipping operations.Hapag-Lloyd Cruises had recently begun ongoing efforts to upgrade and expand its cruise operations with the introduction of two new luxury cruise ships for the expedition cruise market and an order for a third expedition cruise ship scheduled for delivery in 2021. In addition, the company operates two luxury cruise ships, the Europa and Europa 2, and recently began to expand marketing beyond German-speaking travelers into the international markets. TUI reported that the transfer of the individual Hapag-Lloyd Cruises vessels to the joint venture will be completed in the coming days. During the global cruise suspension, the ships have been laid up in Hamburg, Germany.TUI and Royal Caribbean had launched the joint venture TUI Cruises in 2008 targeted at the German-speaking traveler. Recently, the company has been expanding its fleet currently with seven large cruise ships, known as Mein Schiff, and has three additional new builds on order for 2023, 2024 and 2026. TUI Group said it will use the transaction proceeds to strengthen the group’s balance sheet and to drive its transformation into a digital organization. The company is evolving from a traditional tour operator model into a developer, investor and operator of hotels and cruise ships, as well as destination activity provider. TUI announced its digital business model with operations in hotels, resorts and cruises that is less asset and capital intensive.

This news is a total 1743 time has been read
Tags: TUI Completes Sale of Hapag-Lloyd to Royal Caribbean Joint Venture