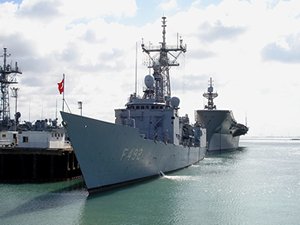 Turkish forces conducted a search and rescue exercise off the coast of Libya, the National Defense Ministry announced on Friday.

Turkey conducts naval exercise off Libya coast Turkey's Defense Ministry announced on Friday that its forces have launched a search and rescue exercise off the coast of Libya.

"Within the scope of the activities of the Turkish Naval Task Group, a search and rescue exercise at sea was carried out by TCG GEMLIK Frigate operating offshore Libya and the helicopter stationed on the ship," the ministry said in a tweet.

Libya has been torn by a raging civil war between the Government of National Accord (GNA) based in the capital Tripoli and the Libyan National Army and its allies based in the east.

Libya’s Government of National Accord, founded in 2015 under a UN-led agreement in the wake of the ouster of Muammar Gaddafi in 2011, has faced a number of challenges, including attacks by warlord Khalifa Haftar.

In recent months, however, it has turned the tide against Haftar's forces.

Turkey supports the internationally recognized government based in the capital Tripoli and a non-military resolution of the crisis.

This news is a total 2432 time has been read
Tags: TCG GEMLIK , haftar , turkish navy