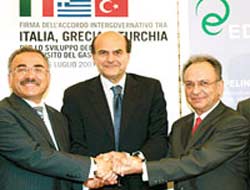 Energy Minister Hilmi Güler on Thursday signed an intergovernmental deal with his counterparts from Italy and neighboring Greece for the construction of a pipeline to bring natural gas from central Asia to European markets by 2011.

Energy Minister Hilmi Güler on Thursday signed an intergovernmental deal with his counterparts from Italy and neighboring Greece for the construction of a pipeline to bring natural gas from central Asia to European markets by 2011.

Ankara attributes high importance to the project as it will strengthen the idea of Turkey being the fourth energy artery of the European Union. The deal was signed at a ceremony held at the Economic Development Ministry in Rome with Pier Luigi Bersani, Italy's minister for economic development, and Dimitris Sioufas, Greece's minister for development, putting their signatures on behalf of their governments. The agreement seals months of negotiations aimed at piping natural gas from the Caucasus to Western Europe through Turkey and Greece.

"Turkey and Greece will become a bridge for the transmission of gas from Anatolia to the West. My earnest desire is to accomplish the tripartite agreement that includes Turkey, Greece and Italy and to pull together a new collaboration for the south corridor," Güler said last week in Ankara, where he signed a protocol with Sioufas providing for Greek purchases of electricity from Turkey at peak periods.

The Turkish-Greek link, initially planned to be finished in June, is now expected to begin operating in late August, while construction on the Greek-Italian connector -- owned by Italy's Edison and Greece's DEPA -- is expected to begin next year.

The pipeline network would include a 212-kilometer undersea connection from Greece to Italy, and is expected to carry 11.5 billion cubic meters of gas a year into Greece, most of it for re-export. The gas is expected to be of non-Russian origin, after strong US pressure to ensure that Europe get its growing gas imports from multiple suppliers. A visit to Athens by Azeri Economic Development Minister Heydar Babayev this month raised expectations that Azerbaijan could supply much of the project's supply.

In March, Greece, Bulgaria and Russia signed an agreement to build an oil pipeline from Bulgaria to Greece to carry Russian crude to the Mediterranean, bypassing Turkey's congested Bosporus Straits.

This news is a total 1769 time has been read