Turkey has to wait its turn for UN 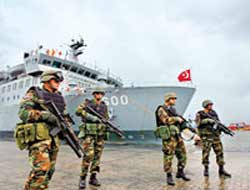 Turkish soldiers stand guard next to the military ship 'TCG ?skenderun' in Beirut in October.

Turkey has to wait its turn for UNIFIL command

The United Nations has decided to extend Germany's command of the naval task force belonging to its international peacekeeping force deployed in Lebanon for another six months, causing Turkey, which has been eager to take over the command from Germany, to wait at least for another half year.

Ankara, exerting intensified efforts for raising the country's visibility in the influential 192-member body, is currently running for one of the non-permanent seats allocated to the "Western European and Others Group" at the UN Security Council for the 2009-2010 term in order to boost its influence in global security affairs.In February of this year, Turkey appealed to the UN to lead the Maritime Task Force of the UN Interim Force in Lebanon (UNIFIL). During the same period of time, the European Union also appealed to the UN to lead the same force following the end of Germany's command. The EU's appeal has widely been considered as being related to its willingness for making its European Security and Defense Policy (ESDP) more visible via a concrete mission. Germany, which contributes eight frigates and 865 crew members, has been in command of the force since October 2006.
Nevertheless, the UN has eventually decided to extend Germany's command, which originally expired as of August 2007, for another six months instead of giving it to Turkey or the EU, diplomatic sources told Today's Zaman, stressing that Turkey's bid was still valid. Meanwhile, EU diplomats have said they were not particularly against Turkey's bid, yet they were also eager to show the bloc's determination for protecting peace through such a mission.

Turkey is already contributing one ship and 234 crew members to the UNIFIL Maritime Task Force, which is supporting the Lebanese Navy in monitoring its territorial waters, patrolling Lebanon's coast and preventing arms smuggling. The force includes contributions from Bulgaria, Denmark, Germany, Greece, Norway and Sweden, in addition to Turkey. The number of Turkish personnel in the UNIFIL Maritime Task Force is expected to increase if Turkey assumes its command.

The Turkish move is an indication of Ankara's desire to boost its contribution to international peacekeeping missions across the world. UNIFIL was deployed to southern Lebanon to monitor a cease-fire between Israeli and Hezbollah forces based in Lebanon. "Turkey has made this request within the framework of the UN Security Council Resolution, dated Aug. 11 [2006], to help boost UNIFIL and also upon a request from the then-UN Secretary-General Kofi Annan," diplomatic sources said at the time.

Turkey is currently involved in international peacekeeping operations in Bosnia and Herzegovina, Kosovo, Afghanistan and Sudan, in addition to Lebanon. Turkey has also been contributing 350 personnel to the European Union Military Operation in Bosnia (EUFOR - Althea). The Turkish unit is deployed in Zenica in Bosnia.

This news is a total 654 time has been read