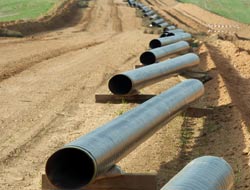 The country is paying between $17 and $18 per million British thermal units for LNG, natural gas chilled for transport by tankers, for immediate delivery this month, Siamak Adibi, a FACTS analyst, said in a report dated February, without elaborating. The price is more than double the U.S. benchmark at Henry Hub, Louisiana.

''Turkey will have a serious gas shortage if the Iranian supplies are not resumed,'' Adibi said in the report. ''The exports were reduced to 140-180 million cubic feet a day late last year and cut to zero in the first week of January 2008.''

Consumption of gas in Turkey rose by 15 percent in 2007 to 35 billion cubic meters of gas, or 3.4 billion cubic feet a day, according to the Web site.

Warmer weather in the past few days has enabled Iran to restart gas exports to Turkey at the rate of 71 million cubic feet a day, Adibi said by phone today.

The gas was made available after residential consumption in Iran declined as the cold weather moderated.

LNG is natural gas chilled to liquid form, reducing it to one-six-hundredth of its original volume at minus 161 degrees Celsius (minus 258 degrees Fahrenheit) for transportation by ship to destinations not connected by pipeline. It is turned back into gas for distribution to users through pipelines.

This news is a total 1171 time has been read