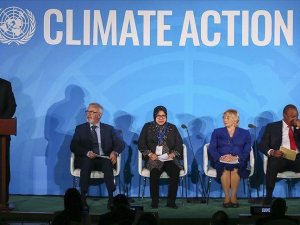 Turkey is a leading country in its region in renewable energy use, the nation's president said Monday."Currently, we are meeting more than 30% of the electricity through renewable energy," Recep Tayyip Erdogan said as he vowed to boost the current rate

Erdogan was speaking at a climate change summit at UN headquarters and said the problems the world faces requires solutions that need regional and international cooperation.

The Turkish president said his country planted more than 4 billion trees and plans to plant 11 million more by Nov. 11.

In a bid to reduce greenhouse emissions and solve traffic congestion, Turkey is building subway lines, and will step up the length of intercity railway system by 50%, said the president.

Turkey will also reduce plastic bag consumption by 75% in line with environmental goals.

Erdogan said the Zero Waste project, initiated by first lady Emine Erdogan, has been adopted in all cities and institutions across the country.

"We are expanding Zero Waste project in all of Turkey. By 2023, we will have switched to Zero Waste system in nearly 400,000 buildings," he said. "We will increase the recovery rate of recycling from 13% to 35%."

Turkey is also working on roadmaps to make new buildings carbon neutral by 2030 and existing buildings by 2050.

Erdogan is in New York to attend the 74th session of the UN General Assembly.

This news is a total 503 time has been read
Tags: Turkey is a leading country, new buildings carbon neutral by 2030