Turkey Sends Ships and Submarine to Monitor Drillship Near Cyprus 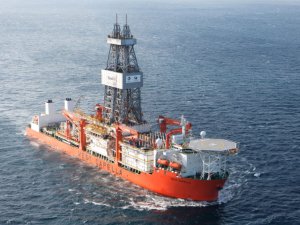 Turkey has sent two ships and a submarine to monitor a drilling vessel in the eastern Mediterranean Sea, the military said on Thursday, in a move likely to increase tension with Cyprus after reunification talks failed last week.

The drilling work, a contractual obligation between Cyprus and France’s Total, comes a week after the collapse of talks to reunify the divided island nation, split between ethnic Greek and Turkish Cypriots.

Ankara has said it will take measures against Cyprus for engaging in gas and oil exploration around the island. It says that hydrocarbon resources in the waters around the divided island should belong to both sides.

The military said it had deployed the frigates and a submarine to the eastern Mediterranean to “guarantee the security of oil transportation.”

Another frigate was dispatched to monitor a drilling vessel off the coast of Cyprus, it said.

Turkey’s energy and foreign ministries are working together to plan steps against the Greek side’s unilateral steps, Turkish Foreign Minister Mevlut Cavusoglu said on Thursday, without giving details on what those steps might entail.

The “West Capella” drilling vessel, which was contracted by France’s Total and Italy Eni, moved into position to start exploring for gas this week.

Turkey, which invaded Cyprus’s north in 1974 in response to a brief Greek-inspired coup, says the island’s internationally recognized government has no jurisdiction to explore for hydrocarbons.

This news is a total 892 time has been read
Tags: Turkey Sends Ships and Submarine to Monitor Drillship Near Cyprus