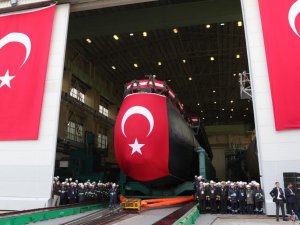 A total of six new submarines, at a pace of one per year, will go into service in the Turkish Naval Forces between 2022 and 2027, Turkish President Recep Tayyip Erdogan said on Sunday.

A total of six new submarines, at a pace of one per year, will go into service in the Turkish Naval Forces between 2022 and 2027, Turkish President Recep Tayyip Erdogan said on Sunday. He added that Turkey may raise the level of military support for UN-recognized Libyan government if required.

In a ceremony at the Gölcük Shipyard in northwestern Turkey, the Pirireis, the first submarine manufactured as part of the project, hit the water in line with the next phase of production. The ceremony also featured the ceremonial welding of the first sheet of metal on the fifth ship, the Seydialireis.

This project constitutes a new stage of the Air Independent Propulsion (AIP) submarines of the Turkish Navy as part of a contract signed with German ThyssenKrupp Marine Systems in 2009. Construction on the first boat in the class, the TCG Pirireis started in 2015.

Submarines will be able to perform long-term operations in confidentiality, high-speed advanced torpedoes, and guided missile that can be thrown to surface targets (including land).

The Type 214 class vessels are regarded as a first for the Turkish Navy due to its air-independent propulsion characteristics brought by their fuel cell technology. The vessels also can deploy heavyweight torpedoes and anti-ship missiles and lay mines against targets, both at sea and on the ground.

The Turkish parliament on Saturday ratified a motion on the approval of a memorandum of understanding (MoU) on security and military cooperation with Libya. On November 27, Ankara and Tripoli signed two separate MoUs; one on military cooperation and the other on maritime boundaries of countries in the Eastern Mediterranean.

This news is a total 529 time has been read
Tags: Turkey to boost naval forces, 6 new submarines, Turkey navy