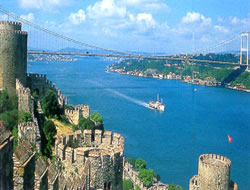 In an effort to protect its world-famous Bosphorus from growing tanker traffic, the government plans new steps to reduce the use of Turkish straits by persuading oil transportation companies to use the Samsun-Ceyhan oil pipeline.

In an effort to protect its world-famous Bosphorus from growing tanker traffic, the government plans new steps to reduce the use of Turkish straits by persuading oil transportation companies to use the Samsun-Ceyhan oil pipeline.

The Foreign Ministry will contact the companies that transport oil via Turkish straits and ask them to ?voluntarily? use the bypass pipeline, whose construction is nearing completion, deputy undersecretary Hakk? Akil said.

?The tanker traffic on the Bosphorus becomes more dangerous day by day,? Akil told daily Referans, adding that the ministry is planning to find a formula that will encourage companies to use the pipeline instead.

The Samsun-Ceyhan oil pipeline is being built by an international consortium led by Italy"s ENI and Turkey"s Çal?k Group. A Russian company is also being considered to join the consortium in the future. The pipeline, with a capacity of 1.5 million barrels of oil per day, is designed to bypass Turkish straits.

Construction costs on the 550-kilometer-long pipeline are expected to be around $2 billion.

Since the early "90s, Turkey has been engaged in an intense diplomatic struggle against Russia, the world"s most important oil and natural-gas exporter, over the use of the Turkish straits. Following some major tanker accidents in the straits that caused serious concerns among the 12 million residents of Istanbul, the Turkish government introduced a new set of measures to regulate tanker passages.

Russia has strongly rebuffed Turkey"s move, arguing that the country cannot block the free-passage right of civilian vessels through the straits under the 1936 Montreux Treaty.

?You can never explain to the residents of Istanbul the Montreux Treaty of free passage when events like the explosion of the Romanian tanker Independente occur. It would lead to a global crisis if the straits close,? Akil said, referring to the accident that took place in 1979.

?Nobody should count on the Turkish straits because someday a tanker accident will happen,? the diplomat added. ?There is no such thing as zero risk.?

Highlighting the economic dimension of transferring the oil through the Samsun-Ceyhan pipeline, Akil said that the ?transportation of oil in a most secure way is always more economic.?

Straits could be closed someday

According to Akil, oil transfer through the straits will end someday, whether an accident occurs or not. ?All companies that dig their oil in the Caspian area, Russia, the Middle East and the Black Sea should know that the Turkish straits are not a reliable solution for them anymore,? he said.

Akil said a public-private partnership model will be employed to satisfy each party and come up with a solution based on ?voluntary principles.? The deputy undersecretary also noted that even though the tankers have the right of way in the straits, their average period of waiting is six days ? a period that can stretch to 42 days during wintertime. This has started to cause problems in terms of global energy security, Akil said, adding that crossing the straits is less profitable than using the bypass line.

In 2007, more than 10,000 tankers carrying oil and other dangerous cargo passed through the straits, according to the official Web site of the Turkish Maritime Organization.

Early in the morning of Nov. 15, 1979, the vessel Independenţe, carrying 94,000 tons of crude oil from Es Sider, Libya, collided with the Greek cargo ship M/V Evriali at the southern entrance of the Istanbul strait. The collision was followed by a large explosion at 5:20 a.m. and both vessels began to burn. The Independenţe ran aground half a mile off the port of Haydarpa?a. Forty-three members of the tanker"s 46-man crew lost their lives. The Turkish Navy immediately attempted to extinguish the fire, but abandoned its efforts due to the fire"s intensity. The directorate of the Sea of Marmara district took over the spill Nov. 19, and the Navy withdrew. The strait remained closed for weeks and the environmental effects of the accident have lasted for years.

The busy straits of Turkey

A total of 18,866 tankers passed through the Dardanelles and Bosphorus straits in 2009. During those trips, 67 accidents occurred near Istanbul, causing the deaths of eight people and the disappearances of four more. There were also 22 accidents, causing two deaths, near Çanakkale in 2009.