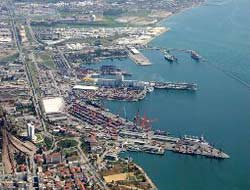 Turkey to rely more On free zones for Foreign trade

That means that the annual capacity is approaching $30 billion. In other words, almost one-third of all the country's exports will be done through free zones by the end of the year.

In today's world, where globalization is constantly expanding, global investors are becoming more prone to investing in regions where they will be able to raise the most profits in the short term. Since foreign capital inflows, direct or indirect, means investment, development and employment, almost all countries are vying to draw as much foreign capital as they can by issuing incentives, easing procedures with proper legislation and providing them with encouraging benefits.

Free zones are one of these incentives. Fifteen percent of total global trade is conducted in free zones. Free zones are supported by governments as they provide enormous employment, high technological input and contribution to the economy. They are also preferred by foreign investors because of tax incentives and an easier customs process, just to name a few advantages.

Free zones are defined as special sites within country's borders but deemed to be outside of Customs territory.They are where valid regulations related to foreign trade and other financial and economic areas are not applied at all, partly applied in some cases or where new regulations are tested. Free zones are also the regions where more convenient business climate is offered in order to increase a country's trade volume and exports in some industrial and commercial activities as compared to the other parts of country.

Although free zones are an important factor in the economy, the government amended the Free Zone Law:

To render the existing legal procedures about free zones compatible with EU legislation, an obligation that the IMF was also pressuring for;

To eliminate unfair competition between local and free zone companies; and

To prevent the use of free zones as a means of tax avoidance.

The sixth item of the Free Zones Law was replaced by Law No. 5084 (which is about the incentive of investment and employment and also making changes in some laws) and which came into effect on Feb. 6, 2004 after it was printer in the Official Gazette.

Income obtained in free zones is exempt from corporate and income tax until the end of the date that is shown in their activity licenses, starting from the date when the law came into force, Feb. 6, 2004;

The salaries that companies pay to their employees in the free trade zones are exempted from income tax until Dec. 31, 2008. However, if there is already an assigned date on their licenses that ends before Dec. 31, 2008, it will be taken into consideration in the application of the exemption;

All their transactions regarding their activities in the free zones are exempted from all kinds of tax and other expenses until the end of Dec 31, 2008; and

These changes limited the former incentives and thus had negative effects on the companies already established in free zones. In return, the total volume of investments in free zones were reduced six or sevenfold.

Despite all these negative effects, investors, especially foreigners, still prefer free zones because of the following incentives:

Free zone users that operate under production license are exempt from income or corporate taxes until the end of the taxation period of the year when Turkey becomes a full member of the EU;

Currencies used in the zone are convertible foreign currencies dealt by the central bank of Turkey;

There is no limitation on the proportion of foreign capital participation in investment within free zones;

There are no procedural restrictions regarding price, standards or quality of goods in Turkish free zones;

Since the trade conducted between Turkey and the free zones is subject to the foreign trade regime, free zone users can purchase goods and services from Turkey without paying value-added tax;

In contrast to most free zones in the world, sales to the domestic market are allowed;

Goods can remain in the zones without any time restriction;

The incentives and advantages provided in the free zones are available to all firms regardless of their origin;

Turkish free zones are close to the EU and Middle East Markets, adjacent to the major Turkish ports on the Mediterranean, Aegean and Black seas and have easy access to international airports and highways;

Infrastructure of the Turkish free zones is competitive with international standards. The rents of closed and open areas are lower than other countries;

The goods in free circulation can be sent to Turkey or to the EU countries from free zones without any Customs duty payment. Moreover, no Customs duty is applied on the goods of third-country origin at the entrance into the free zones and exit to the third countries; and

According to the Treasury Undersecretariat, operating in a free zone can be more advantageous for firms that:

prefer to use foreign currency in all transactions (wholesalers and manufacturers);

It's necessary to eliminate the negative effects created by Law No. 5084 on free zones in order to develop and strengthen Turkey's economy. An exemption from corporate and income tax should be provided to the companies desiring to operate in free zones until Turkey's admission to the EU. Furthermore, there must be the exemption of income tax on fees of workers employed in those zones. To protect Turkish companies against unfair competition, it would be useful to increase the prices of products that are sold to the domestic market by 0.5.