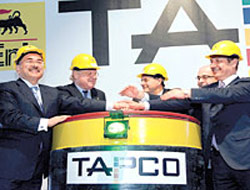 The construction of the Samsun-Ceyhan oil pipeline, also called the Trans-Anatolia Project (TAP), started yesterday after an impressive ground-breaking ceremony in Ceyhan, near Adana in Turkey's south.

Another big step taken to become an energy corridor

The construction of the Samsun-Ceyhan oil pipeline, also called the Trans-Anatolia Project (TAP), started yesterday after an impressive ground-breaking ceremony in Ceyhan, near Adana in Turkey's south.

Completion is estimated to take place within two years, after which the pipeline will carry crude oil from Central Asia and the Caspian Basin to the Mediterranean across Turkey.

Analysts note that the project will increase Turkey's strategic importance as an energy hub and will also reduce the density of traffic in the crowded Bosporus Strait. In a move that some say was aimed to protect its leading position in the energy market, Russia recently launched an alternate project several weeks ago to carry its natural resources to the Aegean Sea, bypassing Turkey, through Bulgaria and Greece. The Burgas-Alexandroupolis pipeline would decrease Turkey's importance as an energy hub, but the TAP is thought likely to compensate for this loss. The US is, however, clearly backing the project, with its embassy in Turkey issuing a written statement yesterday congratulating Turkey and the developers of the pipeline project. The statement defined the project as having great potential for enhancing global energy security as an alternative to the congested Bosporus.

The statement went on to say: "We strongly support the concept of multiple pipelines to enhance global competition and to ensure diversity and security of energy supply. We wish the Samsun-Ceyhan project well in gaining oil throughput commitments to achieve its commercial success. Building on the success of the Baku-Tbilisi-Ceyhan oil pipeline, we are supportive of the development of Ceyhan as an energy center."

The embassy also expressed that the US is also looking forward to continuing to working with Turkey and its neighbors on regional cooperation and toward establishing the commercial framework necessary for sustaining a southern gas corridor to Turkey, and through Turkey to the rest of Europe, from countries such as Azerbaijan, Kazakhstan, Turkmenistan and Iraq.

The Trans-Anatolia Petroleum Company (TAPCO), owned by Çal?k Energy and Italy's energy giant ENI, will be equally responsible for installing the 555-kilometer-long pipeline. Çal?k Group Chairman Ahmet Çal?k and ENI CEO Paolo Scaroni presided over yesterday's ground-breaking ceremony. The TAP is expected to cost nearly $1.5 billion and will have a 1 million barrel per day (bpd) capacity initially, to be later increased to 1.5 million bpd. The ceremony was attended by Energy and Natural Resources Minister Hilmi Güler and Italy's Industry Minister Luigi Bersani.

Ceyhan plays a key role in Turkey's strategic position as an energy corridor, since it is the end point of two existing major oil pipelines carrying Caspian oil from Baku and Iraqi oil from Kirkuk. Turkey is also building natural gas pipelines to export Russian and Iranian gas to Europe.

"You should either have natural resources or become an energy corridor. Turkey is now able to assess both," said Güler in his speech at the ceremony. He admitted that they would make any sacrifice to complete this project and went on to say: "It is extremely important to walk with determined and definite steps for such projects. We are sure that this project will finish in the time planned. Today we are about to connect two seas, the Black Sea and the Mediterranean." Güler added that Turkey will never use its strategic position in energy as a threat. "This is why we are proceeding with our projects in partnerships," he said. "Turkey is now among the most important countries in the world of energy. Once it enters the European electricity network Turkey will also become a terminal point for electricity, as well as oil and natural gas."

Italian Minister Bersani pointed to the benefits of the project and said the pipeline would decrease costs. "I am sure that partnerships between Turkish and Italian companies, like this one, will be carried out in many other projects," he said, adding that such projects will certainly contribute much to Turkey's accession to the EU.

Çal?k also dwelled on Turkey's rising importance in his speech and gave the figures that by 2010, one of every 16 barrels of oil will meet global markets from Turkey. He said the company, which was originally a construction and textile conglomerate, is now shifting its center of gravity towards energy, since this sector is gaining more weight in the contemporary world. "TAP has been the most meaningful project we have so far been involved in," Çal?k claimed, and went on to say: "It is possible to identify Turkey as an island surrounded by an ocean of oil. Three-quarters of all the proven oil and natural gas reserves are around Turkey, and it is now appreciating this position in the best fashion."

This news is a total 1098 time has been read