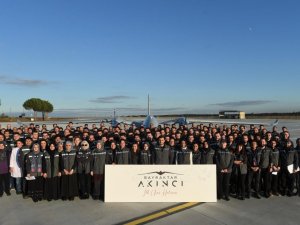 The test was held at an airdrome in Çorlu in northwestern Tekirdağ province. The drone also passed its first engine test back in September.

he Akıncı drone stayed in the air for 16 minutes after smoothly completing fully-automatic taxi and takeoff. Akıncı also successfully performed its first fully-automatic landing at the end of the test.

Operated with two turbine engines, the Akıncı can carry nearly 1.5 tons in useful load: 900 kilograms external and 450 kilograms internal. Flying at an operational altitude at 40,000 feet, the Akıncı can stay in the air for 24 hours. The platform can be controlled via domestically developed satellites.

The Akıncı will also be equipped with an electronic support pod, air-to-air radars, satellite communication system, barrier-identification radar, synthetic aperture radar and meteorological radar – all designed and developed in Turkey. The platform will operate with various ammunition configurations.

The previous version of AKINCI UAV, the BAYRAKTAR has been used by the Turkish Navy frequently in the Aegean Sea. It is called as a “gamechanger” by Turkish officials. As known commonly, unmanned systems assure so many benefits to the forces at sea. The AKINCI can carry out a lot of naval missions with its high payload capability for very long periods and probably would be very useful at surveillance missions. Besides, the drone can carry SOM cruise missile, which could be very useful to the navy at the scene.

The drone is expected to carry out its first test flight within this year and is expected to officially start serving Turkish security forces in 2020.