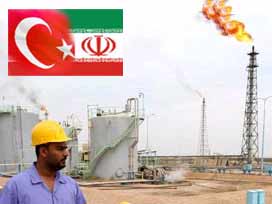 Forty-five years after their country's first bid for membership of the European Union, many Turks still display ambivalence over the country's possible accession.

One reason for the apathy is that the EU has almost never been able to speak to Turkey with one voice.

Even today, there are different messages being transmitted to Ankara.

It could be that, as entry negotiations continue at a snail's pace, the relationship between the EU and Turkey will come to be defined by energy security.

The Union's own gas reserves meet less than 48 per cent of its gas demand, a figure that is set to drop below 20 per cent by 2030.

Europe needs to ensure its energy security by diversifying sources of supply away from Russia's state monopoly, Gazprom, which already supplies more than 20 per cent of the EU's gas, a figure that is also set to rise.

This is where Turkey hopes to play a long-term strategic role.

The country is conveniently positioned between south-east Europe and the immense but still largely unquantified gas reserves of the Caspian Basin, Iraq and Iran.

Plans to transport gas from these regions to Europe via Turkey have been around for more than a decade, but have taken on an increasingly serious edge in the past five years, as a result of the actions of Gazprom.

The Russian company's arbitrary imposition two years ago of price rises on Ukraine - and the threat of cutting supply during the peak winter demand period - sent shockwaves across Europe and was seen as an example of the potential for abuse of the power of monopoly.

It is hardly surprising, therefore, that Turkey looms large in the mushrooming maps of Europe's energy needs and in the strategic thinking of the US. Andris Piebalgs, the EU's energy commissioner, said recently in Istanbul: "Turkey needs the EU and the EU needs Turkey."

Matthew Bryza, a senior US State Department official and envoy on Caspian energy issues, warned recently against allowing Gazprom to gain too much control over exports to Europe, particularly over the transit of gas from Kazakhstan and Turkmenistan.

"Gazprom is by law a monopoly, and by definition the goal of a monopoly is to stifle competition," he said in Istanbul.

"If we can facilitate the arrival of central Asian gas in European markets [via Turkey], perhaps we can use this to nudge Gazprom to behave better."

Turkey, Europe and the US are seeing the beginnings of an alternative to a permanent Gazprom monopoly.

On July 3, Turkey announced it had begun importing, for domestic use, Caspian gas from Azerbaijan through the recently completed South Caucasus Gas pipeline, operated by BP.

This will be followed in August by the first transmission of Azeri gas through Turkey to Greece.

Turkey and Greece, traditional enemies, have linked their gas networks in the interests of European energy security.

There are plans to extend the Turkey-Greece line to Italy, to carry gas to south central Europe by 2011.

The most ambitious project in which Turkey is a central player is the construction of a 3,300km pipeline from eastern Turkey to Europe's main gas transmission hub at Baumgarten an der March, in Austria.

Known as the 'Nabucco Pipeline', it is backed by a consortium that includes the national gas companies of Turkey, Bulgaria and Romania, and the oil groups MOL of Hungary and OMV of Austria.

If completed as planned in 2011, Nabucco will transport gas from multiple sources, including Iraq, Iran, Azerbaijan, Turkmenistan, Kazakhstan, and even possibly Egypt, to customers across Europe, all via Turkey.

Whether Nabucco is realised, however, is in some doubt. In late June, Gazprom announced a venture with the Italian company Eni to build a rival line to carry gas across the Black Sea from Russia to Bulgaria.

If this project is realised, it would almost certainly involve Gazprom transporting gasfrom Turkmenistan and Kazakhstan to Europe.

That could make Nabucco surplus to requirements for some years, while making gas exporters and gas consumers more dependent on Gazprom.

Regardless of the politics, Turkey remains intent on its long-term goal of turning itself into a major supply corridor for Caspian and Middle Eastern gas to Europe.

It is also committed to the Nabucco project, despite overtures from Russia that would allow Gazprom to transport gas to Europe via an existing line to Turkey.

These commitments may not be enough to secure Turkey membership of the EU, but they are likely to become ever more strategically visible, and important, in relations between Brussels and Ankara.

This news is a total 1058 time has been read