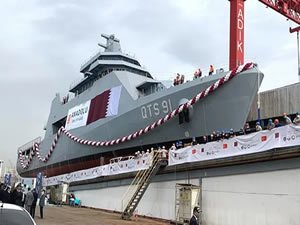 The ship was designed by the Anadolu Shipyard's own crew in accordance with the special requests of the Qatar Naval Forces.

“I wish our training ships to be auspicious for the friendly and brotherly Qatar Armed Forces and strengthen our brotherhood.”

The ship was designed by the Anadolu Shipyard’s own crew in accordance with the special requests of the Qatar Naval Forces.

The ship is 90 meters long and has 1.950 tonnes of full load displacement. Besides basic naval cadet training, CTS will have a helipad for medium size helicopter on the stern and will be capable to provide combat management and weapon training to the trainees as well.

A secondary mission such as offshore patrol duties can be carried out.