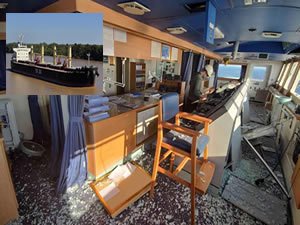 It has been reported that a rocket hit the ship named Jupiter, belonging to YA-SA Denizcilik, off the coast of Odessa.

Turkish bulk carrier YASA JUPITER was hit by either Russian air strike or Russian missile off Odessa, Black sea, on Feb 24, while en route from Dnepro-Bugskiy to Constanta Romania.

According to Turkish MRCC, the ship sustained damages in cargo hold area, but she remained under way, continues voyage.

The ships are bombarding the isle with shell fire, probably preparing troops landing, island’s garrison is holding on.

A bomb hit the Marshall Islands flagged dry cargo ship YASA JUPITER, off the coast of Odessa, belonging to Turkish businessman Yalçın Sabancı, who departed from Odessa, Ukraine and went to Romania.

It was learned that there were no casualties among the 19 crew members, including 8 Turks and 11 Ukrainians, on board. After Russian President Vladimir Putin ordered the operation, many regions in Ukraine became the target of Russian soldiers.

owned by Turkish businessman Yalçın Sabancı, was hit by a rocket off Odessa. While it was learned that there was no loss of life in a total of 19 crew, including 8 Turks and 11 Ukrainians, on the Marshall Islands flagged ship, it was reported that the ship continued its course towards Romania.