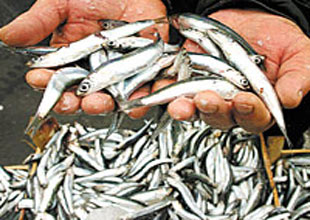 The fishing season began Saturday and fishermen are hopeful for the coming year.

The fishing season began Saturday and fishermen are hopeful for the coming year. As the ban on fishing was lifted, fishermen set out to sea and succeeded in filling their nets despite first-day regulations.

The fishermen believe this season, to run until April 2008, will be generous -- something confirmed by their first nets cast.

Samsun Association of the Fish Covered Market and Fishery Products Commission Chairman Davut K?yak noted that opening day abundance is an indicator that the season will be generous, saying: “There seems to be an abundance of fish in the Black Sea at present. The catch was plentiful even on the first day.”

The fishermen of Samsun have sent three parcels, each equal to 10 kilograms, from their first catches to President Abdullah Gül, Prime Minister Recep Tayip Erdo?an and the Chief of General Staff Gen. Ya?ar Büyükan?t. K?yak added: “We decided to do so because of their contributions to the unity of our country. We want the leading statesmen of Turkey to enjoy eating our first catches as they work for the benefit of our country.”

Those fishing in the eastern Black Sea also saw a good day. Bayram Genç, who has been fishing in the region for 35 years, emphasized that the lifted fishing ban will mean a copious catch this year. Saying that they returned from the catch at night with 150 cases full of mackerel, Genç added: “This is a good beginning compared to the previous season. It indicates a good season.” The fishermen of Çanakkale, on the other hand, weren’t as successful as those in the Black Sea region, but they are still hopeful.

Fishermen of ?stanbul began coming to the Kumkap? Covered Fish Market early in the morning. They stated that there were plenty of mackerel in the first round, but less bonito. The fishermen also underlined that they couldn’t get the catch they wanted as the heat had a negative impact on the amount of fish. ?stanbul Fish Producers Association Chairman Ahmet Menek?e stated: “The temperature of the seawater is 3 degrees above the level it should be, and this caused the amount of fish to decrease. We pray rain will come soon. I hope everything will be fine.”

The first fish of the season also arrived at Ankara’s covered market. Following a brief ceremony at the market, the first fish were displayed to take their places on customers’ tables.

Statistics show that 77 percent of fish in Turkey come from the Black Sea region while the rest is provided by the Marmara with 9 percent, the Aegean with 9 percent and the Mediterranean with 5 percent. Among the general catch, most commercial fishing is done with trawl and sweeping nets. Eighty-two percent of the whiting and 77 percent of the red mullet is caught with trawl nets. There are 752 fishing vessels of various sizes registered in just the Samsun Port on the Black Sea, where thousands of registered vessels fish.

This news is a total 712 time has been read