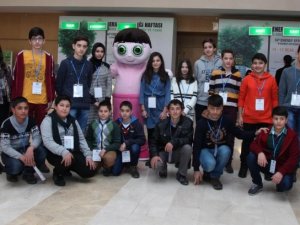 The activities of the ”Energy Kid Project” in Turkey to raise awareness of energy efficiency were displayed on the second day on Thursday of the sixth Energy Efficiency Forum and Fair in Istanbul.

Twenty one children from 21 different provinces of Turkey showcased their energy efficient projects in an initiative between the National Education Ministry and Energy Efficiency Association which was signed on June 1, 2014

The children from grades five to eight from all over Turkey attended the fair and were led by the mascot of the project - the energy kid called Naz.

Children presented their studies that they carried out in their schools. One of the children from Kayseri, a province in the Central Anatolia region of Turkey, said that they cut energy articles from newspapers and stuck them on notice boards so that other children could also read them. Another child explained that they started campaigns to raise awareness of wasting energy and urged users to turn off unnecessary lamps to save electricity and taps to save water in both schools and in homes.

The Chairman of Energy Efficiency Association, Ibrahim Caglar, hailed the project as one of the most important among other social projects during his opening speech of the forum on Wednesday.

"With energy efficiency projects carried out by women, children and in industrial zones, Turkey can save 15 million lira annually (around $7 million)," he emphasized.