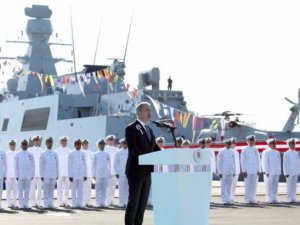 The commissioning ceremony was attended by the President of the Republic of Turkey Recep Tayyip Erdoğan and the Turkish Minister of National Defense Hulusi Akar. Besides the TCG Kinaliada, Istanbul Shipyard also celebrated the first steel cutting for the four future MILGREM corvettes the Pakistan Navy decided to purchase in July 2018.

“Events in the world and especially in the Mediterranean area show that we need to be very strong, especially in the seas. (…) With the experience gained over the years through the MİLGEM project, we have increased the rate of domesticity production to 70 percent,” the President Erdoğan declared.

Unlike the first three Ada-class corvettes, the TCG Kinaliada is equipped with the Atmaca anti-ship missile developed by Roketsan. According to Roketsan, Atmaca is a subsonic, sea-skimming anti-ship missile with a range of over 220km featuring a 250kg-class high explosive fragmentation warhead. In addition, Havelsan and the Turkish Naval Forces Research Center developed the ADVENT Combat Management System, which also be used for the first time on the TCG Kinaliada ship.

The Ada-class, as part of the MILGEM project, the first national ship building project staged in Turkey. Its goal is to build a modern littoral combat ship with indigenous anti-submarine warfare and high-seas patrol capabilities, extensively using the principles of stealth technology in its design.

The class is designed to embark a 10-ton helicopter with platform, hangar and extensie service and handling equipment. Helicopter operations can be performed at sea state 4. A MILGEM corvette is designed to accommodate 106 sailors including the flight crew. The total accommodation is 108 including sickbay.

In July 2018, Pakistan announced that it would be procuring four MILGEM corvettes for the Pakistan Navy. Turkish defence minister, Nurettin Canikli, described the deal as “the largest defense export of Turkey in one agreement.”