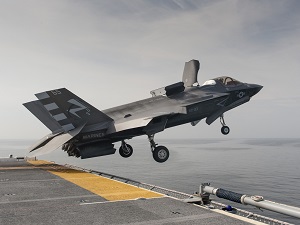 While tensions are rising in North Mediterranean, Ankara makes strategic movements in a row. Turkish Marine Corps Forces made a written demand in order to puchase F-35B Combat Aircraft which can perform vertical landings.

Turkish Armed Forces, planning to have deep sea operational capability both by the aircraft carriers and planes on it, by 2023. By the time the studies will completed, Turkish Armed Forces (TSK) will reach to the classification of most strongest military forces, which will be capable of power transfer functios. Turkey as having a military power within the scale of its jet fighters; will become a global strength.

Navy Pilots will fly on the F-35B Combat Planes. On this occasion, Marine Corps Forces begins to pilot trainings by establishing The Naval Aviation Academy as well. Naval forces train its own pilots by this Academy that provides flight trainings on fixed-wing fligts, flapping wing fligts, and jet fighters. Trainings will be held principally for the 16 F-35Bs that has been planning to purchase from United States.

Jet Fighter pilot trainings will be carried out under the coordination of Naval Forces of Turkish Armed Forces, which will be evolved to new dimensions with the concept of “Naval Aviation”. However TSK turns towards other aircrafts before recieving of the F-35Bs, on account of planes that can perform vertical take-off and landing are required for those trainings. To this end, 2 English Harrier Jump Jets (a VTOL aircraft) is planning to be purchased.

Seeking to an Aircraft Carrier

The multitasked amphibious assault ship, TCG Anadolu, which will meet the aircraft carrier needs of Turkey through national sources, is expected to be delivered to Naval Forces by 2021. After the building of TCG Anadolu, the building process of the second aircraft carrier will begin. According to Yenişafak news, 1 aircraft carrier is planning to purchased from another country, as a support ship of TCG Anadolu as well. Deliberations have been taking places for this purpose, between the companies from United States and UK that are capable of power transfer functios.

This project; which will rise Turkey to the classification of rare military forces that capable of power transfer functios, begins with direction of President Recep Tayyip Erdoğan.

Turkey will have operational capability at the intercontinental area.Turkish Armed Forces will be present all around the world and vindicate itself even at the far lands. As it stands, Turkish Military will be the hope of its friendly and allied nations.