Turkish Navy to receive many new indigenous systems in 2020 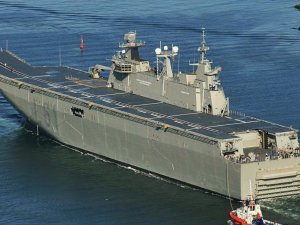 Several new naval, air and land systems will be added to Turkey's defense forces' inventories in 2020. Crucial projects in the defense industry will continue in the new year, the Presidency of Defense Industries (SSB) announced Monday, Jan.6, 2019.

Speaking at a yearly evaluation meeting, Demir said the first domestic maritime missile ATMACA and Turkey's largest-ever warship, the TCG Anadolu, are some of the indigenously produced systems to be added to the inventory of the Turkish military throughout the course of this year.

Carrying out successful and custom-made projects to diminish the dependency on imported products and platforms, the Turkish defense industry has maintained its significant momentum in exports for the last couple of years.

As a result of expedited research and development activities and a range of products, the Turkish defense and aerospace industry carried its export performance to the top in 2019. According to the data obtained from the Turkish Exporters Assembly (TİM), the sector's exports soared 34.6% and hit $2.7 billion last year from $2.03 billion in 2018 – the first time defense exports surpassed $2 billion. Defense sales abroad, which totaled $360.3 million, observed the best monthly performance last year.

This news is a total 260 time has been read
Tags: Turkish Navy , Several new naval