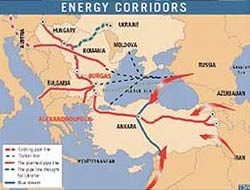 Russian President Vladimir Putin carries his on-going game of energy chess to Istanbul, with his moves leaving Turkish leaders of a mind that Moscow may well have the winning strategy.

Russian President Vladimir Putin carries his on-going game of energy chess to Istanbul, with his moves leaving Turkish leaders of a mind that Moscow may well have the winning strategy.

Russia"s assertive campaign to derail Turkey"s plans to become a major energy transit hub has the Turkish government rethinking its decision to suspend talks with Moscow on building a second natural gas pipeline parallel to an existing one with the aim of carrying Russian gas to Israel and even India.

The energy re-think emerged yesterday on the sidelines of a summit of Black Sea states, known as the Black Sea Economic Cooperation (BSEC). The summit brought leaders to meetings Monday in Istanbul, which included Russian President Vladimir Putin, where he and Turkish leaders began to reshuffle the players on the regional energy chessboard.

To date, the “King” on that chessboard has been a Russian pipeline beneath the Black Sea, known as Blue Stream, with the terminus in the northern coastal city of Samsun. The Russians have been urging a parallel pipeline, “Blue Stream II” but Turkish officials have been wary, preferring a strategy that will bring Central Asian gas into the pipeline mix, effectively challenging Russia"s monopoly on the gas transit to Europe. But diplomats attending the meeting told the Turkish Daily News that the political winds are shifting, and conversations at the summit revealed a new willingness by Ankara to play the game by Russia"s rules.

“By reviving that plan, Ankara aims to deviate Russian gas from European markets to the Asia-Pacific region, and curb Russian ambitions of tapping gas export markets in Europe,” said one insider source, who spoke on condition of anonymity.

Recently, Turkey suspended plans for extending Blue Stream II after Russia signed a deal with Greece and Bulgaria to build an energy pipeline between a Bulgarian port on the Black Sea and Alexandroupolis on Greece"s Aegean cost – effectively cutting Turkey out of the deal.

But Turkey signaled a revision of that decision during a meeting between Russia"s Putin and Turkish Prime Minister Recep Tayyip Erdo?an. Separately, Putin met with Turkish President Ahmet Necdet Sezer. .

The meeting came on the heels of a series of deals sealed by Russia this year to scuttle the Nabucco project, a plan to link Caspian fields to Europe via Turkey and reduce European dependence on Russian gas.

A plan by Gazprom and Italian Eni for a pipeline taking Russian gas to western Europe, one threatening the Nabucco project led by Austria, was unveiled on Saturday. The 990 km “South Stream” pipeline will come ashore in Bulgaria, then branch to Austria and Slovenia in one direction and southern Italy in another. Russia, Turkmenistan and Kazakhstan agreed a landmark gas pipeline deal, to transport Turkmen gas to Russia via Kazakhstan in May. The deal represented a major triumph for Moscow and a setback for Nabucco.
“Russians are not against the construction of the Nabucco pipeline. But they don"t want any alternative to Russian gas being transported via this East-West corridor, because they do not want to loose their influence in the European market,” said a Turkish diplomatic source. “We will try to divert Russian gas from the East-West corridor to the North -South corridor,” said the same source.

“Use North-South instead of East-West corridor”

The Turkish Premier Erdo?an talked to Putin about plans to build a natural gas pipeline linking Samsun on the Black Sea coast to Ceyhan, on the Mediterranean coast, the TDN learned. “We are then planning to extend the pipeline to Israel and from there it could be extended as far as India,” Erdo?an was quoted as saying by Turkish sources. This implies a revision of Turkey"s earlier decision to shelve the Blue Stream II project.

Erdo?an also made clear that Turkey expects Russian participation in a separately planed Samsun-Ceyhan pipeline for oil. Russia has so far been unwilling to transport its oil via Samsun-Ceyhan. According to Turkish sources Putin remained silent when Erdo?an voiced his views on the energy corridor issues. Putin and Erdo?an also met in a private tete-a-tete, the details of which are not known.

The Russian president"s talks with his Turkish counterpart Ahmet Necdet Sezer focused on economic relations. Putin complained about the exclusion of Russian firms from Turkish bids. “Don"t discriminate against Russian firms,” said Putin to Sezer, according to diplomatic sources. But Sezer replied that the judiciary is independent and can interfere in any privatization scheme, a reference to an early Turkish-Russian partnership that was canceled by a court order. The Turkish judiciary"s decision should not be interpreted as a political attitude toward Russia, Sezer told his Russian counterpart, emphasizing the fact that Russian firms are not the only foreign firms affected by such domestic decisions.

The Turkish Zorlu Group participated in the tender in 2004 for the privatization of Turkey"s biggest petro-chemical complex, Tüpra?. The winning bid resulted in 65.76 percent for Zorlu, in partnership with Russian Tatneft for a price of $1.976 billion. However, the tender that was approved by the Privatization High Commission (ÖYK) was cancelled upon the decision of the Council of State.

The facility ultimately was successfully privatized last year. A consortium of the Koç conglomerate and Shell Group of Companies won that tender in September last year for a price of $4.14 billion. The bid by the Koç-Shell partnership was 80 percent above the market price and three-and-a-half times higher than the first tender price.

A plan by Gazprom and Italian company Eni for a pipeline taking Russian gas to western Europe threatens the Nabucco scheme that would link Caspian fields to Europe via Turkey, a Turkish energy official said. But Greek Prime Minister Costas Karamanlis told reporters after meeting Russian President Vladimir Putin at a meeting of Black Sea countries in Istanbul that the South Stream pipeline would complement, not replace, other projects.

The decision to build the link under the Black Sea raises the possibility that Russian gas export monopoly Gazprom will not join the 4.6 billion euro ($6.19 billion) Nabucco project, led by Austria.

A series of deals Russia has signed this year also threatens Turkey’s goal to become a major transit point for energy supplies from the oil and gas rich Caspian and Central Asian regions to the European Union.

“The natural gas and petroleum projects suggested by Russia since the start of the year hurt the projects in which Turkey is involved, even though (Turkey) does not want to accept this,” the Turkish Energy Ministry official told Reuters. The 900 km “South Stream” unveiled by Gazprom and Eni on Saturday would come ashore in Bulgaria, then branch to Austria and Slovenia in one spur and southern Italy in another.“Other parties likely to be less happy about this announcement are European regulators concerned about potential Russian dominance in gas supplies to Europe,” Citigroup said in a research note. Karamanlis took a different view of the issue. “This is a very important project which will contribute to both energy security and diversification,” he told reporters after meeting Putin on the fringes of the Black Sea Economic Cooperation Organisation meeting. “Greece is ready to join it.”“Combined with the Burgas-Alexandropoulis pipeline and the one that goes through Turkey, it will turn the region into a new hub for distribution of energy,” Karamanlis added.

Russia, Greece and Bulgaria earlier this year agreed on a new oil pipeline linking the Bulgarian Black Sea port of Bourgas to the Greek port of Alexandropoulis in the northern Aegean.Commission says plan is positiveThe European Commission also said it did not see the project as a competitor to Nabucco, saying any new infrastructure was helpful to secure energy supplies for the 27-nation bloc.“We see no opposition between the two projects. Any infrastructure that can match this demand is seen as a positive development by the Commission,” a spokesman for the European Union executive said.Putin said the “South Stream” as well as “Northern Stream” pipeline, which will run from Russia to Europe under the Baltic Sea, was in the interests of European consumers. “These are new projects for new contracts,” he told reporters. “They allow us to reach consumers in Europe directly.”Several European countries and Turkey launched Nabucco in an attempt to reduce reliance on Russian natural gas. Gazprom was later urged to join in recognition that it might be difficult for the project to succeed without Moscow’s gas. Nabucco would pump gas from Iran, Iraq, the Caspian and hopefully Russia via Bulgaria, Romania and Hungary to Austria.Nabucco has already been criticised for delays and the lack of a convincing timetable as well as apparent wavering among some countries involved in the project, especially Hungary. State-controlled Gazprom’s chief spokesman Sergei Kupriyanov said on Saturday his company would continue to work with Turkey on plans to supply gas across Turkey and onwards to Israel through the “Blue Stream.” But he declined to say where that would leave the idea of expanding Blue Stream to south-eastern Europe.

This news is a total 557 time has been read