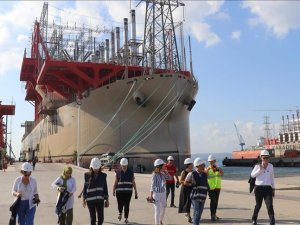 Aysegul Sultan powership with 235 MW capacity will produce electricity from LNG for Senegal to meet 15% of country's needs: Co. head

The powership will sail to Senegal's capital Dakar over the next 20 days.

As part of the commissioning process, the Aysegul Sultan powership will become operational by the beginning of the October and will meet 15% of Senegal's electricity needs, chief commercial officer Zeynep Harezi told reporters during a visit to the Karmarine Shipyard located in Yalova, a province in Turkey's Marmara Region.

Harezi announced that the powership would be the first project in Africa to produce electricity from LNG, with an installed capacity of 235 megawatts.

"We will use fuel oil in the first six months of our operation as a bridging fuel but will convert to LNG at the end of this process and continue to generate 15% of Senegal's electricity over the next five years in line with our contract with the country," she explained.

In addition to the Senegal project, Harezi said the company started to convert its powership fleet from liquid fuels to natural gas.

The company also sent powerships to Iraq and Lebanon in 2010 and 2013, respectively.

With an investment of more than $5 billion, the installed capacity of the fleet totals 3,500 megawatts.

"We light 34 million people all over the world with powerships designed and produced by Turkish engineers in Turkey," Harezi noted.

She added the company would continue to invest in powerships to meet the needs of various countries.

"We currently have 2,000 megawatts under construction while 3,000 megawatts are in design or are planned. Thus, we will increase our capacity to 5,000 megawatts with 20 more powerships in five years time," she said.

She added that an agreement was signed at the end of August between Japanese Mitsui O.S.K. Lines, Ltd. (MOL), the biggest floating storage and regasification unit (FSRU) operator in Asia, and Karpowership. The agreement will see both companies establish the KARMOL company, with each company holding a 50% share interest, to develop a powership and an FSRU.

Karpowership is an Istanbul-based company, and a subsidiary of the Karadeniz Energy Group. The group started its energy investments in 1996, and is Turkey's first private electricity exporter.

This news is a total 993 time has been read
Tags: Karpowership company, Aysegul Sulta, LNG power in Africa Leonardo Da Vinci getting ready for NorwayPrysmian’s new cable-laying vessel Leonardo Da Vinci is undergoing final preparations ahead of being towed from Vard’s shipyard in Tulcea, Romania, to Norway for final outfitting.