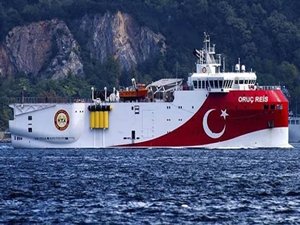 The Turkish seismic survey vessel Oruc Reis will soon return to disputed waters in the Eastern Mediterranean, reprising the role she played in regional tensions in August.

"The maintenance work on our seismic research vessel has been completed," wrote Turkish energy minister Fatih Donmez in a Twitter post.

"We will continue to research, dig and protect our rights. If there is [a resource], we will surely find it." On Monday evening, Oruc Reis' AIS signal showed her holding station at a position about 50 miles south of the island of Kastellorizo, broadcasting restricted maneuverability.

Her location was near to the line between preexisting Greek and Turkish EEZ claim zones; Turkey asserts that the Greek-controlled area to the south of the island is part of its own "Blue Homeland" EEZ claim.

In September, after one of her naval escorts reportedly had a run-in with a Greek Navy warship, Oruc Reis withdrew and the two sides began working on arrangements for a new round of negotiations. Exploratory talks in Istanbul are expected soon.

However, the seismic vessel will now return to the contested area for a period of 10 days, accompanied by the offshore tugs Ataman and Cengiz Han.

The announcement drew an immediate objection from Greece. "The new Turkish [announcement] on surveys south of Kastellorizo within the Greek continental shelf, at a distance of just 6.5 nautical miles from Greek shores, is a major escalation," wrote the Greek Foreign Ministry in a statement.

(Kastellorizo is a small Greek island located about three miles off the Turkish port of Kas, and it is the baseline for the Greek EEZ claim in the region.)

The EU has also cautioned that Turkey could face sanctions if it continues its exploration activity in contested areas of the Eastern Mediterranean.

Ankara has engaged in an extended drilling campaign in Cypriot-claimed waters, drawing strong objections from the internationally-recognized government of Cyprus. The Yavuz, one of two Turkish drillships that have recently operated off Cyprus, withdrew earlier than expected and returned to port last week.

“The departure constitutes another welcome step towards de-escalation," a European Commission spokesman told Reuters, "and we hope for similar and further moves in this direction.”

This news is a total 2310 time has been read
Tags: Turkish Seismic Vessel Returns to Contested Waters