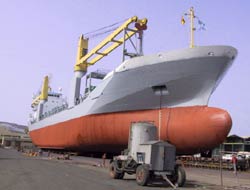 The Board Chairman of Soli Ship Building Industry and Trade Anonym Company which is set at Gabi Nakka?, said that: developing technology, increased the environmental and security controls on ships and by this the usage of ships decreased.

The Board Chairman of Soli Ship Building Industry and Trade Anonym Company which is set at Kocaeli Free Zone, (KOSBA?) Gabi Nakka?, said that: developing technology, increased the environmental and security controls on ships and by this the usage of ships decreased.

Adding "In past,ships had been using for 25-30 years" he defend the idea: "especially chemical and dry cargo ships should be used least for 18-20 years. then should be refreshed

Then Nakka? said "I think of the full capacity work of all dockyards even Tuzla in 2010. Situation is the same at China and South Korea, although they-different from us- have been building high tonnage, at whole world in next 3-4 years the dockyards fullness range will be too high. There has been a highness of fullness."

Apart from the investment for ships Nakka? told, by having investment approximately 50 million dollars, now they are able to built 4 ships at the dockyards they started production last year.

Remarking ,they have been working on 3 ships and their first aim is build 6 or 8 ships during the year, Nakka? "Now nearly 800 employer works, and they are thinking of rising this number to 1500 and they will launch a ship. Tanker which is at tonnage 20 000 ton."

The Master of Founder and Administrator of Kocaeli Free Zone Anonym Company Y?lmaz Kanbak said "At KOSBA? 6 firms building ships with totally 200 million dollars,just one month ago they launched a ship and second one is going to be launched in next month."

Telling that KOSBA? is beginning to be a mostly yacht and ship building specialization free zone Kanbak, added that they give possibility to the entrepreneurs which take investment decision.

Kanbak continued: "Our zone started to be a center of Turkey at ship building.The ship industrialists at KOSBA? just takes orders before 5 years. After now on we have been thinking of launching ships. This will continue like that for a long while."

Finally Kanbak said "Causing giving limited possibility to the industrialists, KOSBA? won't be center, but giving quick investment possibilities it will be, after Yalova and Tuzla, the third one"

This news is a total 1901 time has been read