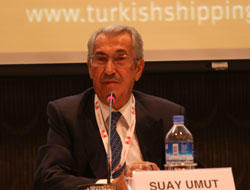 At the Turkish Shipping Summit held yesterday, Suay Umut, the President, Dunya Shipping Group made important comments about the economic situation of Turkey: "We need more support from Turkish Government."

"I believe that today is not the right time to talk; I wish we had started to organize Turkish Shipping Summit many years ago, so that we would have been talking about the changes and new dimensions in Turkish Shipping Industry now." said Mr. Umut and went on his speech this way: "I don"t want to talk pessimistic but as for the current situation, the current events, especially the dry cargo industry is extremely bad and I think it will take one to three years to recover. The global crisis we are through now is not comparable to the ones we had in the past. Formerly, the companies or the sectors were affected by the crisis and they were shut down. But today due to the global crisis, not only one sector or one company but also other sectors and companies are highly affected. The companies, which can survive the crisis will be those to maintain liquidity. The Turkish ship owners must make common cause with each other and must find the way to tolerate the crisis. The banks, which are reluctant to give finance, should back up the industry with finance. Last but not least, we need more support from our government."

Mr. Umut emphasized that the Turkish shipping industry needs more contribution from the government and from the banks.