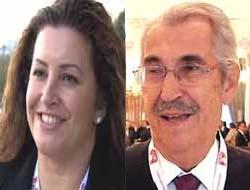 Turkish shipyards may have faced delivery delays because of contracting a heavy orderbook, said a senior Turkish shipowner.

The Kaptanoglu Shipping Group of Istanbul is one of the oldest companies in the sector, but today is looking at widespread diversification.

Sadan Kaptanoglu, granddaughter of the founder, said that while the company was traditional it had always been at the forefront of innovations. Today, changing markets have seen it branch out not only in shipowning, but also to shipbuilding and most recently to yacht building.

As reported in TradeWinds print edition today, the group has just ordered two Kamsarmax bulk carriers at STX Shipbuilding, while earlier in the year it booked a pair of aframax tankers at Hanjin Heavy Industries Cebu facility in the Philipinnes.

Turkish shipyards may have faced delivery delays because of contracting a heavy orderbook, said a senior Turkish shipowner.

Suay Umut, president of Dunya Denizcilik of Istanbul said that with the heavy orderbook yards may have faced problems in finding sufficient trained staff, while rising prices had led them to seek contract renegotiations in some cases.

But Umut, who was the first Turkish owner to book vessels abroad for some 30 years when he contracted tankers in 1997, pointed out that Turkish yards are not alone in experiencing delivery delays.

For the first time ever, he said, the company had a short delay of two weeks on delivery of a Korean-built ship this year.

This news is a total 1215 time has been read