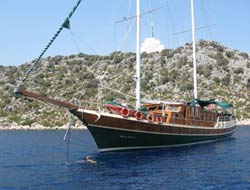 A Turkish passenger ship ran aground near the Greek island of Patmos on Thursday and all 12 French tourists on board were reportedly safe, television reports said.

A Turkish passenger ship ran aground near the Greek island of Patmos on Thursday and all 12 French tourists on board were reportedly safe, television reports said.

The mishap was one of two in Greek waters on Thursday, as meanwhile a hydrofoil caught fire while ferrying passengers between two islands near Athens, but there were no injuries.

The passenger ship 'Diana Forever' with its 12 passengers and three-member crew began sailing from the Turkish western coast towards Patmos when it ran aground two nautical miles from the island.

The passengers were all safe and had been transported to the port of Patmos while the crew remained onboard the vessel.

Greek rescue ships and helicopters were at the scene of the accident.

In a second incident, a hydrofoil passenger vessel caught fire as it was carrying locals and tourists between two islands near Athens, but no one was injured in the accident, reports said.

The hydrofoil, which was travelling between Aegina and Angistri, in the Saronic Gulf, was carrying 79 passengers when one of its engines caught fire just after noon.

The crew managed to extinguish the blaze and the vessel was stirred safely to port, where the passengers were safely evacuated.

This news is a total 1458 time has been read