TV crews welcomed on board 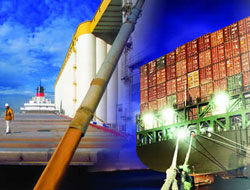 Shipowners should do more to welcome television camera crews and other media professionals on board their vessels.

Shipowners should do more to welcome television camera crews and other media professionals on board their vessels.

According the latest issue of North of England P&I club's bulletin North News, shipowners should do more to welcome television camera crews and other media professionals on board their vessels if the industry is to get the public support it properly deserves.

Mike Salthouse, a director of the "A' rated, 95 million GT mutual, writes, "As an industry, we have allowed a situation to develop in which the only time that shipping comes into the public eye is when disaster has struck. The public can thus hardly be blamed for having a poor image of the shipping industry - but it is this poor perception that lies at the root of many our problems.'

Salthouse points out that the public currently expects its elected politicians to penalise shipowners and their crews whenever something goes wrong - despite their increasing dependence on shipping for day-to-day living. However, he blames the industry's opacity and complacency for the current state of affairs.

"The shipping industry's failure to communicate the value it delivers is due to an outdated and misguided notion of who its customers actually are,' he says. "A shipowner's customers are not just the parties with which it has a contractual relationship. Ultimately the cost of a shipment is met by the end purchaser of the goods - and they should be considered the customers. It is they who pay the bills.

He calls for a wholesale change of mindset. "Shipowners, charterers, P&I clubs, classification societies, shipbuilders - in fact all of us within the industry - need to start promoting ourselves by explaining what we do to everybody and anybody who will listen,' he says.

In particular Salthouse urges the industry to capitalise on media initiatives such as The Box, a BBC News project launched in September 2008 to track a shipping container around the world for a year. "Such opportunities to explain on mainstream media the nature of goods transported, the type of ship used and even the carriers involved, do not come by very often,' he says. "Interviews could be given by the master and the crew, and cameras should be welcomed aboard to view the conditions in which the crew operate.' Further details of the project are also reported in North News.

Salthouse concludes that continuing to ignore its true customers is not an option for the shipping industry. "If we do this, seafaring will become an increasingly unpopular profession, increasing the difficulty of sourcing crew â?" which, in turn, will have a knock-on effect in terms of casualties. Legislators will further penalise shipping interests and restrict shipowners' liability rights. More worryingly, the tendency to compel the shipping industry to compensate parties for loss, irrespective of fault on the part of the shipowner, will gain momentum and the cost of P&I claims will continue to rise.'

North currently insures some 350 member groups from around the world, with a total P&I entry of 3750 vessels of 95 million GT (70 million GT owned and 25 million GT chartered). The club is based in Newcastle-upon-Tyne, UK with regional offices in Hong Kong, Piraeus and Singapore.

This news is a total 546 time has been read