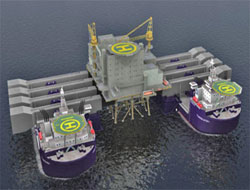 Stavanger-based SeaMetric International AS has signed a contract for the construction, assembly and testing of the first 20,000 tonnes capacity Twin Marine Lifter (TML) system.

Stavanger-based SeaMetric International AS has signed a contract for the construction, assembly and testing of the first 20,000 tonnes capacity Twin Marine Lifter (TML) system.

Developed for installation and removal of such objects as platform topside and jackets with weights up to 20,000 tonnes, the Twin Marine Lifter system is based on using two heavy transport vessels.

The contract for the first TML system has been placed with contract with ESSCA (Hongkong) Ltd in consortium with China Petroleum First Construction Corporation (CPFCC) and the JingJiang Nanyang shipyard near Shanghai.

CPFCC will be responsible for the overall project management, the construction of the TML lift arm system and for assembly and testing of the complete TML system

The two DP class 3 heavy transport vessels that are the basis for the TML lifting system will be subcontracted to the JingJiang Nanyang shipyard which is a privately owned shipyard with 20 years experience.

The DP class 3 heavy transport vessels, being used for the TML heavy lift systems are 140 nf long, 40 meter beam and have a dwt capacity of 25.000 tonnes. They will have accommodations for 41, a helideck, and will be capable of submersion to -20 meters.

"This is a breakthrough for SeaMetric," says CFO Johan F. Andresen. "We have negotiated a very good contract with a very strong and capable fabrication group. CPFCC is a subsidiary of CNPC, a company with 1.4 million employees, about the same as the entire Norwegian workforce. We have also options in the contract for the construction of one more TML heavy lift system and two 180 meter long submersible heavy transport vessels (HTVs). These vessels will be similar to the vessels now being built, and they have the capacity to support a 30.000 tonnes TML system."

The vessels will be financed with a combination of equity and a bond loan. Fearnley Fonds has placed a bond loan of an initial $60 million with possible subsequent extension to $105 million.

This news is a total 1151 time has been read