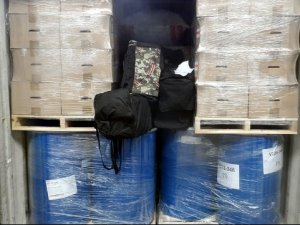 Customs officials at the Port of Rotterdam reported the discovery of two separate incidents of cocaine smuggling in containers arriving at the port over the weekend.

A total of approximately 242 kilos of cocaine with an estimated street value of more than $21 million was discovered in two different shipments both originated in Brazil.

In the first instance, inspectors searched a container that had arrived in Rotterdam on July 22 from Santos. The container that was destined for a company in Rotterdam, was manifested to be carrying orange pulp. Hidden behind a wall in the container, customs officers found 30 kilos of cocaine.

The second discovery was also in a container that arrived in the port on July 22. This time it was on a container ship arriving from Paranagua and was destined for a company in Germany. The manifest reflected that the container was loaded with printer ink.

The inspection of the second discovered 11 sports bags containing 212 kilos of cocaine. The bags had been placed in with the cargo.

The discoveries were made by a partnership of Customs, FIOD, seaport police and the Public Prosecution Service in Rotterdam. An investigation I ongoing into the smuggling.

This news is a total 777 time has been read
Tags: Two Cases of Cocaine Smuggling Discovered in Rotterdam on the Same Day